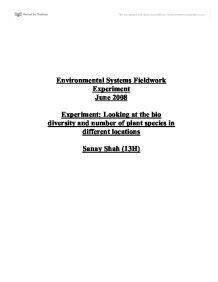 we placed the quadrat next to the tree, to best represent the data. While conducting the experiment we felt that 15 samples was too little, but considering the time constraint it was the best sample that was capable of being achieved. We felt that this could effectively highlight the distribution. Aslo in the woodland, some of the plants were not taken into consideration since there was not a large abundance of them and it was difficult to collect the information of all the sedentary species in the woodland. Therefore after analysing the first few sample we came to the conclusion of which species were in the largest abundance and this was chosen to represent the data of the woodland. DATA PROCESSING AND COLLECTION Location: Groenplan Name of Plant Percentage cover (%) Grass 51.27 Clover 38.20 Daisy 6.28 Greater Plantain 1.27 Dandellions 0.33 Creeping Buttercup 2.13 Location: Woodland Area Name of Plant Percentage cover (%) Bramble 43.67 Meadow Butter Cup 17.67 Ivy 2.00 Willow 2.33 Umbelliferae 3.67 Moss 1.33 Dwarf Elder 0.67 Dandellion 0.67 Leaf litter 28.00 Errors in data collection - While working out the percentage cover in the woodland area, we were not provided the divided quadrat which meant that the percentage cover of sedentary species were approximated. ...read more.

This meant that the measuring tape along which the quadrat's position was determined was moved accidentally, which may have biased the results. Also while going to a specific location for a quadrat, if it was being used or was occupied by a tree, we were forced to take the sample next to the actual postition. This could have affected the results since the sampling was no longer random as it was changed by other exogenous factors. I feel that when carrying out this experiement again, the number of people working on the site should be reduced, this will ensure that the test is fair. Also it should be kept constant whether the student is provided with a divided or undivided quadrat to make the experiment as fair as possible. Finally, it must be ensured that when something comes in the way of the sampling, then the same method for a shift in the quadrat is agreed. Lastly, I feel that this experiment needs further investigations. It would be interesting to observe the results during different seasons of the year as well as different times during the day. This experiment was run during the afternoon on a sunny day in June. The invetigator should consider looking to try and remove the pollution and waste in both the Groenplan and woodland area to make the test fair. ?? ?? ?? ?? ...read more.