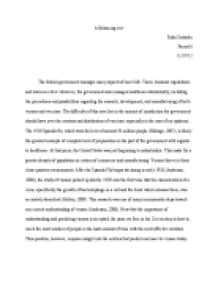 Many opinions about how to tackle the research and development of viruses and vaccines has to do with two entities: the federal government and the private sector.

﻿A Balancing Act Rishi Seshadri Period 6 11/27/12 The federal government manages many aspects of one's life. Taxes, business regulations, and laws are a few. However, the government also manages healthcare substantially, including the procedures and possibilities regarding the research, development, and manufacturing of both viruses and vaccines. The difficulty of this area lies in the amount of jurisdiction the government should have over the creation and distribution of vaccines, especially in the case of an epidemic. The 1918 Spanish flu, which took the lives of around 50 million people (Billings, 2007), is likely the greatest example of complete lack of preparation on the part of the government with regards to healthcare. At that point, the United States was just beginning to industrialize. This made for a greater density of population in centers of commerce and manufacturing. Viruses thrive in these close quarters environments. After the Spanish Flu began declining in early 1920 (Anderson, 2006), the study of viruses picked up slowly. ...read more.

But consider the case of a widespread epidemic, such as that of the Spanish flu in 1918. In a span of two years, 50 million people fell victim to the disease worldwide. At the time, there were less than 2 billion people in the world. But in 2012, with a population of over 7 billion people worldwide, there must be a more efficient route to researching, testing, and manufacturing these drugs. In 1918, 30 million people died in the time it would take the FDA to simply approve a vaccine should an epidemic sweep the planet. On top of the time needed to approve these vaccines, scientists would also have to be able to replicate the virus, study its activity, and create or modify a current vaccine to effectively combat the virus (Walsh, 2011). This task could take months in itself, especially if the Center for Disease Control (CDC), another government organization, works in the same way as the FDA. The bottom line is that these factions of the government are slow, expensive, yet thorough. ...read more.

By allowing the private sector to spearhead research and development of new drugs, particularly in the case of an epidemic, one opens up the possibility of finding a cure quicker, cheaper, or more effectively. This desire for achievement will be driven by the existence of competition as well as the ability to make money by patenting the drug. With that being said, the FDA and CDC should maintain involvement, but with a less hands-on approach. The FDA should have the final say on the standard of drugs. If the FDA or another entity does not review products made by the private sector, the standard of current medicine will waver, leading to lower quality treatments and therapies. Furthermore, the FDA must streamline its process, especially in crisis situations. In order to fight against something, you must understand it. Simply because the government facilitates research into viruses does not mean that they are the only people capable of analyzing the data. The more people working towards a solution, the better the chance of success. These entities must work together to effectively predict, react to, and combat annual viruses as well as epidemic situations. ...read more.