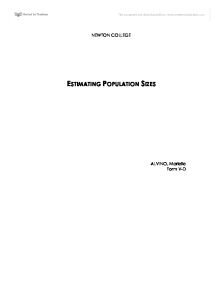 NEWTON COLLEGE ESTIMATING POPULATION SIZES ALVINO, Marielle Form V-D September, 2009 ESTIMATING POPULATION SIZES To estimate population sizes when the individuals are hidden or too numerous to count in a given area, it is ideal to estimate these numbers with a random selection of samples taken in the given area with quadrats. Using a given and later chosen area, we will then toss the quadrats and record the number of individuals in that area to estimate the population density. METHOD: Experiment A- Using a model in the lab The equipment that was used for measuring the population and the dimensions of the model were: � A quadrat of 0.1m x 0.1m or 100 cm2 � A marked area on bulky paper where drawn crosses indicate organisms � A 100cm ruler Using a quadrat to estimate the populations of small stationary organisms First, we measured of the dimensions and area of the paper using the ruler, which are best represented in the diagram below, whose uncertainty is �0.005 cms: To find the area of the marked area, I first have to calculate areas A, B and C with some basic formulas: Area of Rectangle= width x length Area of Triangle= (width x length) ...read more.

The dandelion is "a perennial, herbaceous plant with long, lance-shaped leaves. They're so deeply toothed, they gave the plant its name in Old French: Dent-de-lion means lion's tooth in Old French." The images of dandelions below help illustrate the above description: Fig. 2: A group of dandelions Fig.3: A single dandelion at close METHOD The equipment that was used for measuring the population and the dimensions of the model were: � A football � A quadrat of 50 cm2 � A measuring tape The area from where we withdrew our results was a rectangular area located behind the school's coliseum. The following sketch describes the area in greater detail: As we can see, the selected area for our experiment had dimensions of 1000 cm in width and 2050 cm in depth. In order to fin the area we need to use the following formula: A (cm2) = length (cm) x width (cm) From this formula we can deduce our selected area is 2050000 cm2 or 205 m2. Out quadrat's measures were 50 cm so that the covered and area of 2500 cm2 each time they were threw. We must note before starting with the description of our method that the locations of the dandelions is unevenly distributed as the north west corner of the selected grass field has a higher concentration of ...read more.

On a couple of occasions when the quadrat fell outside the area, the data was changed which could have affected our results and the uneven distribution of the dandelions in experiment B could have biased the data collecting and eventual calculation of population size. As well, the measuring of the area, especially in experiment B is not accurate and may be a little off since the measuring tape had to be used several times at one side as it only covered around 500 cm. During the measuring process errors of measurements may have occurred. To reduce and eliminate the inaccuracies of this experiment, we could measure the area several times and in case of getting different measurements we could average them in order to get a more exact area and thus population density. Furthermore, a field where the dandelion population was not clearly unevenly distributes would have been ideal and a higher amount of throws would have given us a far more accurate idea of the estimation for the dandelion population. Perhaps our method for random throws was a bit biased a major efforts were not purposefully taken to make sure the throws landed in distributed areas of the area in order to maintain randomness, but maybe a systematic collection would have proven to be more precise. ?? ?? ?? ?? ...read more.