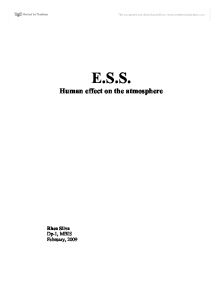 Growth may be proportional to the air's carbon dioxide concentration in any year. We can age a tree by counting its rings, and the width of the rings can help us to estimate the carbon dioxide in the past years. 5. What does the passage suggest may be limiting factors to tree growth? The limiting factors to tree-growth are the lower concentrations of carbon dioxide, lower temperatures and fewer nutrients to build tissues. 6. What is it 'ironic' that the pollution from the fossil fuels may have caused tree growth to increase? It is ironic because the pollution from the fossil fuels or acid rain is often blamed for forest decline. ...read more.

9. Why may rising temperature and rising carbon dioxide concentrations be an example of positive feedback? Increasing temperature increases the rate of decomposition, raises the incidence of forest fires and kills trees, so increasing the rate of supply of organic carbon to decomposers. All these processes mean that more carbon dioxide enters the atmosphere, which enhances the greenhouse effect, thus raising the temperature. Graph questions: Calculate the percentage of total sea-level rise which is predicted to occur as a consequence of thermal expansion in 2050. 18/25=72% Suggest why the effect of global warming in Antarctica might lead to a decrease in sea-level. Global warming will result in higher atmospheric and sea temperatures, which increases rates of evaporation from the water. There will therefore be a decrease in sea-level. In addition, a warmer atmosphere is capable of holding more moisture. ...read more.