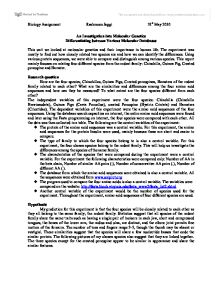 An Investigation into Molecular Genetics Differentiating between Various Molecular Databases This unit we looked at molecular genetics and their importance in human life. The experiment was mostly to find out how closely related two species are and how we can identify the differences. Using various protein sequences, we were able to compare and distinguish among various species. This report mainly focuses on relating four different species from the rodent family: Chinchilla, Guinea Pig, Crested porcupine and Hamster. Research question How are the four species; Chinchillas, Guinea Pigs, Crested porcupines, Hamsters of the rodent family related to each other? What are the similarities and differences among the four amino acid sequences and how can they be measured? To what extent are the four species different from each other? The independent variables of this experiment were the four species: Chinchilla (Chinchilla Brevicaudata), Guinea Pigs (Cavia Porcellus), crested Porcupine (Hystrix Cristata) and Hamsters (Cricetidae). The dependant variables of this experiment were the amino acid sequences of the four sequences. Using the database search capacities on internet, the entire amino acid sequences were found and later using the Fasta programming on internet, the four species were compared with each other. All the data was then collected in a table. The following are the control variables of the experiment: * The protein of the amino acid sequences was a control variable. ...read more.

However, the evidence of two insulin genes in other rodent species other than rat and mouse is negative or week. A hamster has only one insulin gene even though the presence of two insulins in hamster pancreas is reported. Also, only one gene has been found in the guinea pig genome. This suggests that the guinea pig and hamster are somewhat related but not completely which is another reason why they have at least 39.5% of resemblance. Many scientists also suggest the presence of pig/rat-type insulin in the cells of a guinea pig caused by very ancient gene duplication. This could be another reason why the four species are so different from each other. Most of the results above that I achieve do not support my hypothesis. In future, I would use a larger variety of species for my project, so that could learn more about the differences among different species. I would like to also use a different amino acid protein for my experiment such as hemoglobin so that I could learn more about the differences among the different species caused by different types of proteins. This will help me discover and understand key factors affecting the differences among species; no matter what family they belong to. Next, I would also try to use sequences of equal lengths so that it is a fair test. To conclude, I don't think that the method requires any changes and cold be redone by the changes made above because the websites I used for my experiment gave me accurate results. ...read more.