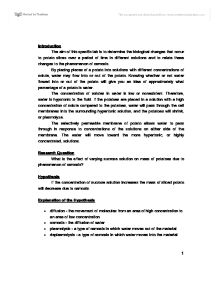 Introduction The aim of this specific lab is to determine the biological changes that occur to potato slices over a period of time in different solutions and to relate these changes to the phenomenon of osmosis. By placing pieces of a potato into solutions with different concentrations of solute, water may flow into or out of the potato. Knowing whether or not water flowed into or out of the potato will give you an idea of approximately what percentage of a potato is water. The concentration of solutes in water is low or nonexistent. Therefore, water is hypotonic to the fluid. If the potatoes are placed in a solution with a high concentration of solute compared to the potatoes, water will pass through the cell membranes into the surrounding hypertonic solution, and the potatoes will shrink, or plasmolyze. The selectively permeable membrane of potato allows water to pass through in response to concentrations of the solutions on either side of the membrane. The water will move toward the more hypertonic, or highly concentrated, solutions. Research Question What is the effect of varying sucrose solution on mass of potatoes due to phenomenon of osmosis? Hypothesis If the concentration of sucrose solution increases the mass of sliced potato will decrease due to osmosis. Explanation of the Hypothesis * diffusion - the movement of molecules from an area of high concentration to an area of low concentration * osmosis - ...read more.

It is important to enter the mass of the potato slices into the data table so you can compare it to the size of the potato slice the next day. 2. Slice each potato to a mass of 26 grams. NOTE : each potato doesn't have to be 26 grams. The goal is to end up with four potato slices of exactly the same mass. 3. Using the balance, measure and record the mass of each potato slice. 4. Fill the graduated cylinder with distilled water preciously 100ml of water up. Then pour 100ml of water into a beaker. 5. Calculate the mass of sucrose needed to reach the certain concentration for each different beaker. Achieve 0%, 2.5%, 5%, 10% and 50% of sucrose concentration and label each beaker with certain percentage rate. 6. Attach each potato core, one at a time, to the end of the spoon and hold it so that the potato core is completely submerged in the water. Record the time when all potatoes were submerged. 7. Cover the top of each beaker with a piece of food film. Fold the food film down and seal along the sides of the beaker with masking tape. 8. Allow the beakers to sit for preciously 24 hours. 9. Remove the cores from each beaker using the spoon. ...read more.

As well I achieved the accurate isotonic solution at sucrose concentration of 10 %. The standard deviations of all three trials are excessively large since I included 50% of sucrose concentration as a maximum. According to the data chart, throughout all trials, I was able to accomplish hypotonic solution at 0 % concentration, hypertonic solution at 50% concentration and reasonable isotonic solution near 10%. During the trail 2, I derived preciously 0 g of mass change becoming a solid evidence of isotonic solution; however other two isotonic solutions could be considered inaccurate due to closeness to 0g of -0.1 g of mass change. I would suspect a simple inaccuracy or recording error measuring the mass of sucrose or the initial mass of potato. Evaluation of the Procedure The goal, previously mentioned, was to end up with four potato slices of exactly the same size. However, during this experiment, the mass of the each potato slices were accurate however, I was less careful on volume and surface area. Thus one of improvement can be done by squaring off the ends of the potato to at least 8 cm long. Stand it on end and bore three vertical holes. Space them close together so that one or two other groups can use the rest of the potato. As well, recording the difference of volume and surface area including mass will increase the reliability and accuracy of Osmosis lab. ?? ?? ?? ?? 1 ...read more.