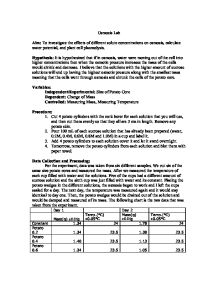 Osmosis Lab Aim: To investigate the effects of different solute concentrations on osmosis, calculate water potential, and plant cell plasmolysis. Hypothesis: It is hypothesized that if in osmosis, water were moving out of the cell into higher concentrations then when the osmotic pressure increases the mass of the cells would shrink and decrease. I believe that the solutions with the higher amount of sucrose solutions will end up having the highest osmotic pressure along with the smallest mass meaning that the cells went through osmosis and shrunk the cells of the potato core. Variables: Independent/Experimental: Size of Potato Core Dependent: Change of Mass Controlled: Measuring Mass, Measuring Temperature Procedure: 1. Cut 4 potato cylinders with the cork borer for each solution that you will use, and then cut them evenly so that they all are 3 cm in length. Remove any potato skin. 2. Pour 100 mL of each sucrose solution that has already been prepared (water, 0.2M, 0.4M, 0.6M, 0.8M and 1.0M) in a cup and label it. 3. Add 4 potato cylinders to each solution cover it and let it stand overnight. ...read more.

The degrees would stay the same in both days but as you can see there is a change is the data for mass from day one to day two. The osmotic pressured was also measured causing the loss of mass in the potato. Osmotic Pressure Constant 0 Potato 0.2 -0.39888 Potato 0.4 -0.78114 Potato 0.6 -1.17171 Potato 0.8 -1.56228 Potato 1.0 -1.95285 The chart above is the data of the osmotic pressure of the solution and the potato core. The osmotic pressure is found using the formula OP=-MiRT. M is the molarity of each cup, which would be the amount of sucrose solution in the cup. For example, Potato 0.4 the molarity would be -0.4. The symbol (i) is the ionization constant that will remain 1 and r is the gas constant, which is 0.0831. This is all multiplied together with the temperature measured in each solution. OP of Potato 0.4 OP=-0.4(1)(0.0831)(23.5) =-0.78114 Data Analysis: The data being shown is the graph of the masses taken in day one and day two of the experiment. The masses were measured and now are analyzed to see if you are able to detect a difference and understand if osmosis was taken place in the sucrose solutions. ...read more.

Conclusion and Evaluation: In conclusion, my hypothesis was correct showing the higher sucrose solution the decrease of mass would occur through osmosis. In the experiment I was able to decipher that the more sucrose involved the more solute the solution gets. When the solution becomes solute it becomes a hypertonic solution that allow the potato cores to get smaller and lets water move out of the cell at higher concentrations. The mass was decreasing in the potatoes because the potatoes were losing water causing the cells to shrivel up. This experiment was very accurate because we used electronic devices to measure all the data points taken. The uncertainties were all put into account so room for error was not a big factor in this experiment. A limitation that can be made is that the experiment was only a two-day period and time wasn't very flexible causing to rush the experiment. Also, it would have been a more decisive experiment if we were able to take more trials of each solution for the best possible accuracy. If I were to make any improvements on the experiment, it would be an increase in days to perform the experiment and also more trials to analyze for accuracy. ...read more.