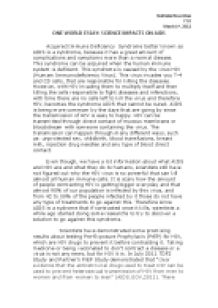 Outline Scientific Advances in the Fight Against AIDS

﻿Nathalia Boucinhas Y 10 March 1st, 2012 ONE WORLD ESSAY: SCIENCE IMPACTS ON AIDS Acquired Immune Deficiency Syndrome better known as AIDS is a syndrome, because it has a great amount of complications and symptoms more than a normal disease. This syndrome can be acquired when the human immune system is deficient. This syndrome is caused by the virus HIV (Humam Immunodeficiency Virus). This virus invades you T-4 and CD cells, that are responsible for killing the diseases. However, with HIV invading them to multiply itself and then killing the cells responsible to fight diseases and infenctions, with time there are no cells left to kill the virus and therefore HIV, becomes the syndrome AIDS that cannot be cured. AIDS is being more commom by the days that are going by since the transmission of HIV is easy to happy. HIV can be transmitted through direct contact of mucous membrane or bloodstream with someone containing the virus. ...read more.

In July 2011 TDF2 Study and Partner?s PrEP Study demonstrated that ?clear evidence that the antiretroviral drugs used to treat HIV can be used to prevent heterosexual transmission of HIV from men to women and from women to men? (AIDS.GOV,2011). There were also good news to the homosexuals, because as the results mentioned in November 2010 was that a daily dose of antiviral drug of HIV can reduce the chance of contracting HIV but not eliminate it. However, the problem is how are those new contribuents to prevent HIV will be used in the real world, the drugs used were already aprooved by the FDA (Food and Drug Administration), but the PrEP HIV still has not been aprooved by the FDA. In 2011 CDC also published interim guidance for physicians on HIV Pre-Exposure Prophylaxis for Men Who Have Sex with Men, and they urge heterosexual to consider those guidances before taking in consideration PrEP. Therefore, it is still not very well seen but with time it can be improved and most people will use it. ...read more.

Let?s hope so. Due to the vaccine, scientists have also figured out that breast milk has antibodies that neutralize HIV. "This finding indicates that enhancement of these responses through vaccination could help reduce HIV transmission via breastfeeding," says corresponding author Sallie Permar of Duke University, Durham, NC(Science daily, 2011). Even though that is a great discover to contribute to the vaccines, the breast milk antibodies are not working efficiently since ?Nearly half of the 350,000 new infant HIV infections occurring annually are transmitted via breast milk? mentioned in Science Daily. However, it is still a lower number than the number of babies contracting HIV from birth. Even though, it is not very effective, scientists are looking forward to use this new information into the vaccine and as they say it can probably reduce the amount of people getting HIV in the world. Happily as able to see, scientists and science are improving day by day and fortunately impacting HIV/ AIDS in a positive way. With some new researches and new ideas to reduce the contraction of HIV, hopefully in years science will be able to let people contract no HIV at all. ...read more.