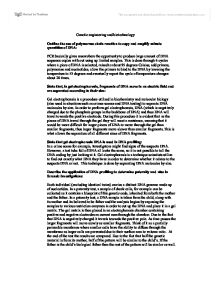 Genetic engineering and biotechnology Outline the use of polymerase chain reaction to copy and amplify minute quantities of DNA: PCR basically gives researchers the opportunity to produce large amount of DNA sequence copies with out using up limited samples. This is done through 6 cycles where a piece of DNA is selected, raised to about 95 degrees Celsius, add primers, polymerase and nucleotides, allow the primers to bind to the DNA by lowering the temperature to 53 degrees and eventually repeat the cycle of temperature changes about 20 times. State that, in gel electrophoresis, fragments of DNA move in an electric field and are separated according to their size: Gel electrophoresis is a procedure utilized in biochemistry and molecular biology (also used in situations such as crimes scenes and DNA testing) ...read more.

State that gel electrophoresis DNA is used in DNA profiling: In a crime scene for example, Investigators might find signs of the suspects DNA. However, a test tube full of DNA all looks the same, so it is not possible to tell the DNA coding by just looking at it. Gel electrophoresis is a technique scientists utilize to find out exactly what DNA they have in order to determine whether it relates to the suspects DNA or not. This technique is done by separating DNA molecules by size. Describe the application of DNA profiling to determine paternity and also in forensic investigations: Each individual (excluding identical twins) ...read more.

Think of it as a partially permeable membrane where smaller cells have the ability to diffuse through the membrane as larger cells are prevented due to their surface area to volume ratio. At the end of the test the results are compared. Due to the fact that half the genetic material is from its mother, half of the pattern will be similar to the child's. If the father is the child's biological father then the rest of the pattern will be similar as well. In a forensic investigation the same method is carried out. However instead of gathering DNA samples from parents and children, they gather DNA from suspects. For example in the case of rape there might be remaining sperm cells around the victims vagina. This can be collected, analysed and used against the suspect. ...read more.