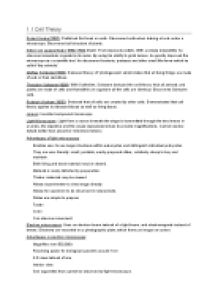 ﻿1.1 Cell Theory ________________ Robert Hooke(1665): Published first book on cells. Discovered cells when looking at cork under a microscope. Discovered cell structure of plants. Anton von Leewenhoek (1650-1700):Dutch. First observed protists. With a simple lens(x200), he observed unicellular organisms & nuclei. By using his ability to grind lenses, he greatly improved the microscope as a scientific tool. He discovered bacteria, protozoa and other small life-forms which he called 'tiny animals'. Mattias Schleiden(1838): Deduced theory of 'photogenesis' which states that all living things are made of cels or their derivitives. Theodore Schwann(1839): With Schleiden, Schwann deduced the cell theory- that all animals and plants are made of cells and that within an organism all the cells are identical. Discovered Schwann cells. Rudolph Virchow (1855): Deduced that all cells are created by other cells. Demonstrated that cell theory applies to diseased tissue as well as living tissue. Jansen: Invented compound microscope. Light Microscopes: Light from a source beneath the stage is transmitted through the two lenses in a series, the objective and the ocular (eyepiece) lenses to provide magnifications. Cannot resolve details better than about 0.2 mm(micrometers) ...read more.

1.3 Eukaryotic Cells ________________ Vocabulary: ATP: energy molecule used in active transport against the concentration gradient. Centrioles: vital for reproduction (production of spindle fibres) Chloroplast: contains chlorophyll and is present only in plant cells. Is involved in photosynthesis. Concentration gradient: difference of concentration between two substances Cytolysis: animal cell exploding Cytoskleteon: maintains in cell shape Endocytosis: food/liquid going into the cell Endosymbiosis: The theory that mitochondria and chloroplasts are descended from specialized bacteria. This is because these organelles both contain their own DNA and this DNA is present in a single, continuous molecule, like the DNA of bacteria. Many of the enzymes contained in the cell membranes of bacteria are found in the mitochondrial membranes. Also, they both have their own ribosomes that resemble those of bacteria. Mitochondria can only be produced by mitochondria, like cells from cells. Probably these organelles used to be simple bacteria and were swallowed up by bigger bacteria who could not digest them. In turn these organelles provided the cell with energy in return for protection etc. and turned into an organelle. Equilibrium: equal amounts moving in and out Exocytosis: waste going out of the cell Flaccid: animal cell shrinking Golgi Apparatus: stacks of flattened membranous sacs. ...read more.

Golgi apparatus- assembly point through which raw materials for secretion are funnelled, carbohydrate components are added, and then are shed from the cell. Lysosomes- destroy unwanted structures (e.g. old mitochondria), or entire cells by the rupturing of the lysosome membrane and the releasing of digestive enzymes (e.g. tadpole tails in frog metamorphosis). Mitochondria- concerned with the chemical reactions of aerobic respiration; i.e. energy is converted to ATP here (the inner surface is infolded to increase surface area). Nucleus- contains genetic information (bounded by a nuclear membrane). Chloroplasts- contain chlorophyll used in photosynthesis DNA in Prokaryotes Vs. DNA in Eukaryotes: DNA is loose in prokaryotic cells, in eukaryotic cells the DNA is contained within a nuclear envelope. DNA in prokaryotic cells is circular, in eukaryotic cells it is arranged in chromosomes Prokaryotic cells have about 1/1000 as much genetic material. Cell Reproduction: prophase separate when nuclear membrane disappears nucleolus disappears centrioles go to poles spindle fibers appear chromosomes get shorter and thicker metaphase centrioles become asters the chromosomes line up ?single file? at the equator spindle fibers attach to centromere with kinetochore anaphase the chromatids are pulled towards opposite poles telophase the nuclear membranes reappear nucleolus reappears asters become centrioles in animals spindle fiber disappears chromatids get longer and thinner and become chromatin. ...read more.