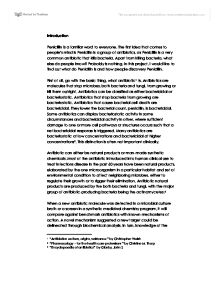 Penicillin - its discovery, properties and uses.

Introduction Penicillin is a familiar word to everyone. The first idea that comes to people's mind is Penicillin is a group of antibiotics, as Penicillin is a very common antibiotic that kills bacteria. Apart from killing bacteria, what else do people know? Probably is nothing. In this project, I would like to find out what do Penicillin is and how people discovery Penicillin. First of all, go with the basic thing, what antibiotic1 is. Antibiotics are molecules that stop microbes, both bacteria and fungi, from growing or kill them outright. Antibiotics can be classified as either bactericidal or bacteriostatic. Antibiotics that stop bacteria from growing are bacteriostatic. Antibiotics that cause bacterial cell death are bactericidal. They lower the bacterial count, penicillin, is bactericidal. Some antibiotics can display bacteriostatic activity in some circumstances and bactericidal activity in other, where sufficient damage to one or more cell pathways or structures occurs such that a net bactericidal response is triggered. Many antibiotics are bacteriostatic at low concentrations and bactericidal at higher concentrations2. This distinction is often not important clinically. Antibiotic can either be natural products or man-made synthetic chemicals. Most of the antibiotic introduced into human clinical use to treat infections disease in the past 60 years have been natural products, elaborated by the one microorganism in a particular habitat and set of environmental condition to affect neighboring microbes, either to regulate their growth or to rigger their elimination. Antibiotic natural products are produced by the both bacteria and fungi, with the major group of antibiotic-producing bacteria being the actinomycetes.3 When a new antibiotic molecule was detected in a microbial culture broth or a screen in a synthetic medicinal chemistry program, it will compare against benchmark antibiotics with known mechanisms of action. A novel mechanism suggested a new target could be delineated through biochemical analysis. In turn, knowledge of the targets and mechanism of action of major antibacterial drug classes also gave a range of assays that would allow categorization of newly discovered antibacterial by mechanism of action. ...read more.

Fleming could easily show that it did no harm to white blood cells: this was important because the laboratory he worked in, handed by Almroth Wright, had long been committed to the idea that the key to effective treatment was to mobilize the body's own capacity for defense. Fleming himself, during the First World War, had studied infections in soldiers' wounds and had argued that conventional antiseptics both killed off white blood cells faster than they killed bacteria, and failed to penetrate into the jagged interstices of gumshot wounds: they were, he thought, positively fostering infection. He could also striaghtforwardly show, by injecting the broth derived from his mould into a very small number of mice and rabbits, that it was not toxic. And he could also show that it quickly lost its anti-bacterial effect when mixed with disgestive juices: there would be no point in taking it as a pill. Fleming was surely moving towards injecting ''mould broth filtrate'' - penicillin into infected animals to see if would cure them. By April 1929, Fleming seems to have lost all interest in injecting penicillin into bloodstream. As penicillin took around four hours to kill bacteria, but tests showed that both in animals and in the test tube it ceased to be active in blood after two hours. This seems to have persuaded him that it would be pointless introducing penicillin into a diseased body. The possibility that penicillin might have a future use as an antiseptic was mentioned in Fleming's first and only major publication on his new discovery, which appeared in 1929. He wrote: "It was suggested that it may be an efficient antiseptic for application to, or injection into, areas infected with penicillin-sensitive microbes." Between 1930 and 1940, 18Fleming made no effort to develop a clinical use of penicillin. Throughout this period, however, he employed it regularly for the one use that was outlined in his key publication. While penicillin killed many bacteria, it did not kill a bacterium called Pfeiffer's bacterium. ...read more.