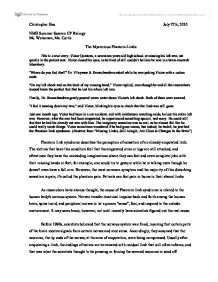 Christopher Hsu July 27th, 2010 NMH Summer Session CP Biology Ms. Weissman, Ms. Curtis The Mysterious Phantom Limbs This is a true story. Victor Quintero, a seventeen years old high school-er missing his left arm, sat quietly in the patient seat. Victor closed his eyes, as he kind of still couldn't believe he was in a brain-research laboratory. "Where do you feel that?" Dr. Vilayanur S. Ramachandran asked while he was poking Victor with a cotton swab. "On my left cheek and on the back of my missing hand," Victor replied, even though he and all the researchers around knew the perfect fact that he lost his whole left arm. Finally, Dr. Ramachandran gently poured warm water down Victor's left cheek. Both of them were amazed. "I feel it running down my arm," said Victor, blinking his eyes to check that the limb was still gone. Just one month ago, Victor had been in a car accident, and with misfortune watching aside, he lost his entire left arm. However, after the arm had been amputated, he experienced something special, and scary. He could still feel that he had his already cut arm with him. The imaginary sensation was so real, as he almost felt like he could really touch things. Victor sometimes wondered if he had gone insane, but indeed, he hadn't; he just had the Phantom limb syndrome. (Abstract from "Missing Limbs, Still Atingle, Are Clues to Changes In the Brain") ...read more.

He tried and finally succeeded to understand better the functioning of the somatosensory cortex of the patients who have phantom limbs. He then discovered that the true reason is the "cross-wiring" of the brain. Somatosensory cortex is an area in the brain that receives nervous inputs from the body that are related to tactus, the sense of touch. In the case of a phantom limb, the responding area in the somatosensory cortex is forced to stop getting signals once the limb is amputated; however, the nearby areas in the somatosensory cortex are found to take over the part that no longer function. Here, although this adjustment is bothering the humans; nevertheless, strong adaptive ability of the homo sapiens can be seen as the brain can command this kind of change to make sure the body can function as normally as possible. (Even literally the whole process is now still unhelpful as it isn't possible to recover if any organs of the body are removed.) From original studies, scientists knew that the responding area in the somatosensory cortex is right next to the face, as that of foot is next to the hand. Demonstration led by Dr. Ramachandran on his patient Victor Quintero confirmed this totally new theory. There are now more efficient treatments than 20 years ago. As well developed by Dr. Ramachandran, the mirror box helps the patients relives their pain from phantom limb syndrome. ...read more.

First recognizable records can be traced back to the 16th Century or even earlier. In 1551, Ambroise Pare, a famous French military surgeon wrote "For the patients, long after the amputation is made, say they still feel pain in the amputated part. Of this they complain strongly, a thing worthy of wonder and almost incredible to people who have not experienced this."(Herman) As well, there are all the other myths from the country associating with ghosts and spirits. In the famous literature piece Moby Dick, the captain Ahab has a phantom leg. Still nowadays, a phantom limb can be extraordinary unusual to most of the people. Most of the people do not understand the cause and some misleading may have sever consequences. There is no doubt that a person that completely has not idea what Phantom limb syndrome is would think of a victim of it a psycho. Victims with this kind of syndrome shouldn't be treated differently. In final conglomeration, Phantom limb syndrome is interesting and mysterious while it is also a troublesome issue for the humans. According to research, approximately 75% of the patients that have undergone any amputation would have the condition, for a brief period or a longer time. Even though now there is a well developed theory of the cause of syndrome, thanks to Dr. Ramachandran, it seems like better treatments are still in need. In the near future scientists, hopefully, should have found some ways to interfere the signals sent from the amputated limbs' remaining when they better understand the nervous system, especially the brain. ...read more.