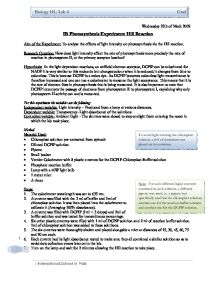 Wednesday 25th of Mach 2009 IB Photosynthesis Experiment: Hill Reaction Aim of the Experiment: To analyse the effects of light intensity on photosynthesis via the Hill reaction. Research Question: How does light intensity affect the rate of photosynthesis more precisely the rate of reaction in photosystem II, at the primary acceptor location? Hypothesis: In the light dependant reactions, an artificial electron acceptor, DCPIP can be substituted for NADP it is very similar to this molecule but changes colour when it is reduced; it changes from blue to colourless. This is because DCPIP is a redox dye. As DCPIP becomes colourless light transmittance is therefore increased and one can use a colorimeter to measure the light acceptance. This means that it is the rate of electron flow in photosynthesis that is being measured. It is also important to note that DCPIP interrupts the passage of electrons from photosystem II to photosystem I, explaining why only photosystem II activity can and is measured. For this experiment the variables are the following: Independent variable: Light intensity - Produced from a lamp at various distances. Dependant variable: Transparency- Light absorbance of the solutions Controlled variable: Ambient Light - The shutters were closed to stop sunlight from entering the room in which the lab took place. ...read more.

A disagreement is noticed in the last set of values. Graph 2. This graph shows the average values plotted and their respective error bar. A trend is easily noticed as the values increase in a logarithmic way, steadily approaching a certain optimum. However the last value (44.5 Wm-2) does not correspond to anything expected and is an admitted error possibly caused by another limiting value of photosynthesis that has changed, such as temperature. Conclusion An undetermined but possibly non-linear regression relation was found; possibly a logarithmic one as Blackman and Wilson's "Physiological and ecological studies in the analysis of plant environment" heavily suggests this as it is stated that "the net assimilation rate during the season of active growth is linearly related to the logarithm of the light intensity". However a clear conclusion that has to be made is that light is indeed a limiting and essential factor to the rate of photosynthesis in photosystem II, as it is light that provides photons and excites electrons as soon as it touches the pigment molecule. In isolated chloroplasts, light is required as the name of the observed reaction states, light dependant reaction. In addition, since DCPIP stopped electrons from passing from photosystem II to I, the primary products of the light dependant reactions, ATP and NADPH2, could not have been required and the Calvin cycle had no resources available to take place. ...read more.

This could have easily been fixed by placing the cuvettes in an alternating fashion, describe in a diagram besides. The experiment's quality was also deteriorated by the light pollution emitted by surrounding experiments in the room. The simple solution is simply to do each experiment one at a time. DCPIP being a blue compound itself when oxidized obscured the light intended for the chloroplasts to react causing the rate of reaction to happen at an increasing rate while the DCPIP reduced, becoming colourless. Another factor that would have increased the quality of the results would have been to use a lux meter to measure the illuminance at various distances and not have to really on the relationship, which is not the most precise way of measuring light intensity. Finally more distances should have been tested, as we have no data for 15 to 45 Wm-2. Distances such as 16, 17 ,20 ,22, 25, 27 would have been extremely useful for two reasons. Firstly because we would have data for the large range of light intensity blank and we would have had 12 different measures allowing a proper statistical test to be used. In this case a non-linear regression test would have been the most suited for testing the relationship. ?? ?? ?? ?? | International School of Paris ...read more.