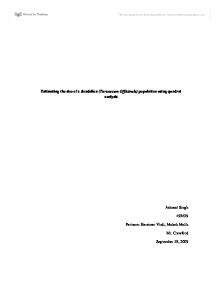 Estimating the size of a dandelion (Taraxacum Officinale) population using quadrat analysis Ashneet Singh 493629 Partners: Harsimar Virdi, Mohak Malik Mr. Crawford September 18, 2009 Purpose To estimate the population of dandelions on the school's football field. Introduction Succession is the process of the development of a sequence of communities over a period of time. There are many methods that are used in ecology to measure the population of a species. Collection of data in the case of immobile (stationary) species, such as the population of plants being studied for this investigation, was collected using line transects. These are analysis methods across a representative part of the habitat, along which quadrats are laid to cover a certain area for collecting population data. The dandelion population being studied is located in the school's soccer field, where some plants have been tempered with, due to mowing and excrements left by another species. Also, human impact (students that play in the fields) has also affected the growth of the population in various places. Variables Controlled - The size of the circular quadrat, meaning the hula-hoop, the day for the experiment, and the distance between each quadrat. Independent - The initial positioning of the quadrat from the base line (first quadrat) ...read more.

Also, since this data was shared within the group, the counting of the population by different members may have created the chance of a differing bias, thus keeping the data inconsistent. The counting of the plant can be difficult due to the way the plant grows in the field, overlapping other dandelion plants. This may also have been the reason to the fluctuations shown in Graph 1, not only due to the excrement and student footsteps in various parts of the field. If this investigation were to be performed again, the steps taken between each successive quadrat should be thoroughly measured with a ruler or tape measure, and then placed, rather than walking 5 steps, which leaves room for huge error. If one wants better representation of data, this is mandatory. When moving towards the fence and away from the base line, one should either look straight ahead and walk in order to stay in the same line transect. Alternatively, the fields could have been marked with lines representing the transects and even the positions of the quadrats, which would have drastically boosted the accuracy and precision of the investigation. Also, if the data is to be shared within the group, then in order to stay consistent, there should be one counter for all the quadrats, removing any discrepancies. These are various ways that the data collection method proves to be very weak and inconsistent. ?? ?? ?? ?? ...read more.