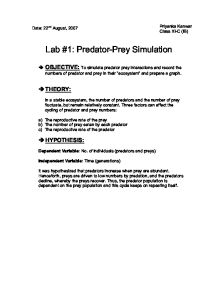 Date: 22nd August, 2007 Lab #1: Predator-Prey Simulation ==> OBJECTIVE: To simulate predator prey interactions and record the numbers of predator and prey in their "ecosystem" and prepare a graph. ==> THEORY: In a stable ecosystem, the number of predators and the number of prey fluctuate, but remain relatively constant. Three factors can affect the cycling of predator and prey numbers: a) The reproductive rate of the prey b) The number of prey eaten by each predator c) The reproductive rate of the predator ==> HYPOTHESIS: Dependent Variable: No. of individuals (predators and preys) Independent Variable: Time (generations) It was hypothesized that predators increase when prey are abundant. Henceforth, preys are driven to low numbers by predation, and the predators decline, whereby the preys recover. Thus, the predator population is dependent on the prey population and this cycle keeps on repeating itself. ==> PROCEDURE: 1. Place 3 "prey" on the table. 2. Toss 1 predator onto the table (evenly dispersed) ...read more.