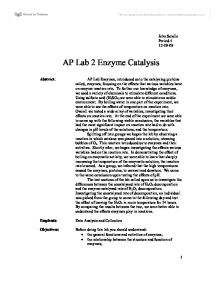 ProblemWhat kind of roles the factors of pH levels and temperature have on various reaction rates. What roles inhibitors and activations play on enzymatic reactions.

John Sciullo Period-4 12-09-09 AP Lab 2 Enzyme Catalysis Abstract: AP Lab Enzymes, introduced us to the catalyzing proteins called, enzymes, focusing on the effects that various variables have on enzyme reaction rate. To further our knowledge of enzymes, we used a variety of chemicals to stimulate different conditions. Using sulfuric acid (H2SO4) we were able to stimulate an acidic environment. By boiling water in one part of the experiment, we were able to see the effects of temperature on reaction rate. Overall we tested a wide array of variables, investigating their effects on reaction rate. At the end of the experiment we were able to come up with the following viable conclusion; the variables that had the most significant impact on reaction rate had to do with changes in pH levels of the solutions, and the temperature. Splitting off into groups we began the lab by observing a reaction in which catalase was placed into a solution, releasing bubbles of O2. This reaction introduced us to enzymes and their activities. Shortly after, we began investigating the effects various variables had on the reaction rate. In demonstrating the effect of boiling on enzymatic activity, we were able to learn that sharply increasing the temperature of the enzymatic solution, the reaction rate lowered. As a group, we inferred that the high temperatures caused the enzymes, proteins, to unravel and denature. We came to the same conclusion upon testing the effects of pH. The last sections of the lab called upon us to investigate the differences between the uncatalysed rate of H2O2 decomposition and the enzyme-catalyzed rate of H2O2 decomposition. ...read more.

Having a lack of control variables, the lab remains subject to the countless ever-changing variables. A person performing this experiment in the Arctic will attain tremendously different results than one performing it in the Mojave Desert. Fortunately solutions and simple improvements exist to better the procedure and rid it of the problems, limitations, and weaknesses outlined previously. A simple solution to the pipette problem would be to acquire and use droppers. In doing so we would be provided accurate, viable quantitative data that would support our ultimate conclusion. Had we been supplied droppers, we would have been able to add a further dimension to our conclusion. A similar solution can be used to solve the problem of a lack of barometers. Although we found a way to bypass the need for one, it was a minor inconvenience and caused us to make some changes to the procedure. However, our conclusion would in no way change had we been given access to barometers. Lastly, to rid the lab of any weaknesses, the procedure would have to be changed to access and outline the wide array of variables that must be controlled to assure the validity of the data. The skills and knowledge gained from this lab enabled us to better understand life's biological processes. The knowledge we gained can be applied to real life situations, and often is, in the case of biologists and other professionals in the scientific field. A pharmacist trying to achieve a reaction needs to have a deep understanding of the workings of enzymes and other catalysts. The importance of enzymes can be seen throughout the world, without them, life as we know it would not exist. ?? ?? ?? ?? 1 ...read more.