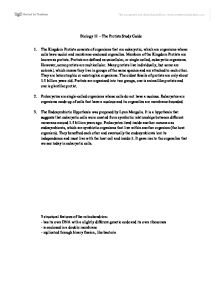 Biology 11 - The Protists Study Guide 1. The Kingdom Protista consists of organisms that are eukaryotic, which are organisms whose cells have nuclei and membrane-enclosed organelles. Members of the Kingdom Protista are known as protists. Protists are defined as unicellular, or single-celled, eukaryotic organisms. However, some protists are multicellular. Many protists live individually, but some are colonial, which means they live in groups of the same species and are attached to each other. They are heterotrophic or autotrophic organisms. The oldest fossils of protists are only about 1.5 billion years old. Protists are organized into two groups, one is animallike protists and one is plantlike protist. 2. Prokaryotes are single-celled organisms whose cells do not have a nucleus. Eukaryotes are organisms made up of cells that have a nucleus and its organelles are membrane-bounded. 3. The Endosymbiotic Hypothesis was proposed by Lynn Margulis. It is a hypothesis that suggests that eukaryotic cells were created from symbiotic relationships between different monerans around 1.5 billion years ago. Prokaryotes lived inside another moneran as endosymbionts, which are symbiotic organisms that live within another organism (the host organism). They benefited each other and eventually the endosymbionts lost its independence and must live with the host cell and inside it. ...read more.

These sporozoites migrate to her salivary glands. Then, the mosquito bites a human, and the sporozoites are based into the bloodstream and then the liver of the host. Asexual spores are produced in the liver and they enter the bloodstream and then red blood cells. The red blood cells bursts and spores invade and reproduce asexually inside new red blood cells. Spores and toxins get into the bloodstream. Some spores become male and female gametocytes and enters the bloodstream. They become gametes when they are taken up by a mosquito. This disease is transmitted back to the mosquitos if it bites a human who is infected with malaria. The mosquito will then bite another human, causing the spread of this disease. 13. Malaria can be controlled by destroying breeding areas for Anopheles mosquitoes so the life cycle of plasmodium is interrupted and prevents the spread of malaria. 14. Ameba: Ameba moves by extending out a pseudopod, after which the cytoplasm streams into the extended pseudopod, pulling the rest of the cells with it. This is known as ameboid movement. It eats by engulfing other organisms with their pseudopods and forming a vacuole around them. ...read more.

It provides our planet with lots of oxygen and food through photosynthesis and is a direct source of nourishment for organisms such as shrimps and whales. Land animals such as humans also get nutrients indirectly from them. 27. Slime molds are found near rich sources of food such as rotting wood, piles of compost, and even thick wet lawns. They are not photosynthetic and have several fungus-like characteristics. Acrasiomycota starts off as separate individual cells that look like amebas. They reproduce and feed voraciously as long as there is food. When food runs out, they join with others to form a mass of cells that acts like a multicellular organism. It will form reproductive structures called fruiting bodies that produce spores by mitosis. The spores that are released grow into ameba-like cells, and the life cycle repeats. 28. Myxomycota starts off as separate individual cells that look like amebas. Each of these cells can go through repeated mitosis to form a structure called a plasmodium, which may have thousands of nuclei enclosed within a single cell membrane. They can grow to be several centimetres in diameter. Eventually, fruiting bodies grow from the plasmodia which produce haploid spores by meiosis. The spores are released and germinate into ameboid and also flagellated haploid cells. They then fuse to form diploid ameboid cells and the cycle goes again. ?? ?? ?? ?? ...read more.