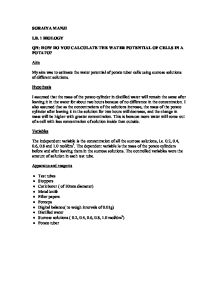 QN: HOW DO YOU CALCULATE THE WATER POTENTIAL OF CELLS IN A POTATO?

SORAIYA MANJI I.B. 1 BIOLOGY QN: HOW DO YOU CALCULATE THE WATER POTENTIAL OF CELLS IN A POTATO? Aim My aim was to estimate the water potential of potato tuber cells using sucrose solutions of different solutions. Hypothesis I assumed that the mass of the potato cylinder in distilled water will remain the same after leaving it in the water for about two hours because of no difference in the concentration. I also assumed that as the concentrations of the solutions increase, the mass of the potato cylinder after leaving it in the solution for two hours will decrease, and the change in mass will be higher with greater concentration. This is because more water will come out of a cell with less concentration of solution inside than outside. Variables The independent variable is the concentration of all the sucrose solutions, i.e. 0.2, 0.4, 0.6, 0.8 and 1.0 mol/dm3. ...read more.

The percentage change in mass can be calculated in the following way: Change in mass of cylinder before and after expt. � 100 Original mass of cylinder This is shown in the table overleaf: Table 4: Test tube Change in mass/ g Percentage change in mass D.W 0.25 17.3 0.2 1.03 14.2 0.4 0.82 30.5 0.6 0.83 30.3 0.8 0.77 34.7 1.0 0.88 24.8 Conclusion and evaluation From the results, it could be seen that there was some error in the experiment, because the percentage change in mass did not increase in all cases as the concentration increased. This is possibly because the cylinders were cut from different potatoes, which caused a variation in the result. Another reason for the error could be that the concentrations of the sucrose solutions were not accurate. Another method of carrying out an experiment of osmosis is to use a red blood cell instead of a potato. The red blood cell would probably increase in size when put into water. Another investigation that can be carried out is how time of keeping the potato cylinder in the solution can affect its water potential. ...read more.