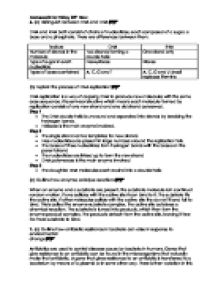 Questions on RNA and DNA, bacteria and immunity.

Homework for Friday 25th Nov: 6. (a) Distinguish between RNA and DNA. [3] DNA and RNA both consist of chains of nucleotides, each composed of a sugar, a base and a phosphate. There are differences between them. Feature DNA RNA Number of strands in the molecule Two strands forming a double helix One strand only Type of sugar in each nucleotide Deoxyribose Ribose Types of bases contained A, C, G and T A, C, G and U Uracil replaces thymine (b) Explain the process of DNA replication. [8] DNA replication is a way of copying DNA to produce new molecules with the same case sequence. It is semi-constructive which means each molecule formed by replication consists of one new strand and one old strand conserved. ...read more.

The substrate fits the active site. If other molecules collide with the active site the do not fit and fail to bind. This is called the enzyme-substrate complex. The active site catalyzes a chemical reaction. The substrate is turned into products, which then form the enzyme-product complex. The products detach from the active site, leaving it free for more substrate to bind. 7. (a) Outline how antibiotic resistance in bacteria can arise in response to environmental change. [5] Antibiotics are used to control diseases cause by bacteria in humans. Genes that give resistance to an antibiotic can be found in the microorganisms that naturally make that antibiotic. A gene that gives resistance to an antibiotic is transferred to a bacterium by means of a plasmid or in some other way. ...read more.

Foreign pathogen cell invades body, which leads to clonal selection and the formation of the B memory cell. B cells produce specific antibodies; if the same pathogen enters body again memory cells are activated to divide. Antibodies produced faster and in greater amounts. (c) Discuss the benefits and dangers of vaccination. [7] * Benefits o Some diseases such as small pox can be eradicated o Deaths can be prevented o Long-term disabilities can be prevented * Rubella in pregnant women can lead to birth defects * Mumps can cause infertility in men * Dangers o Immunity developed after vaccination may not be as effective as immunity developed in response to the actual disease o Dangers of side effects of some vaccines include: * Whooping cough, vaccine can cause brain damage * Pregnant women, cancer patients, and others can be harmed by cross-infection from people vaccinated with the live virus ...read more.