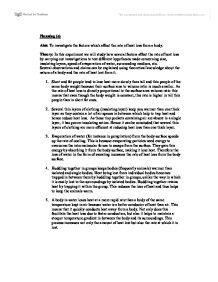 Planning (a) Aim: To investigate the factors which affect the rate of heat loss from a body. Theory: In this experiment we will study how several factors affect the rate of heat loss by carrying out investigations to test different hypotheses made concerning size, insulating layers, speed of evaporation of water, surrounding medium, etc. Several observations and claims can be explained using theoretical knowledge about the nature of a body and the rate of heat lost from it. 1. Short and fat people tend to lose heat more slowly than tall and thin people of the same body weight because their surface area to volume ratio is much smaller. As the rate of heat loss is directly proportional to the surface area volume ratio this means that even though the body weight is constant, this rate is higher in tall thin people than in short fat ones. 2. Several thin layers of clothing (insulating layer) keep you warmer than one thick layer as they contain a lot of air spaces in between which help to trap heat and hence reduce heat loss. As these tiny pockets containing air are absent in a single layer, it has poorer insulating action. Hence it can be concluded that several thin layers of clothing are more efficient at reducing heat loss than one thick layer. ...read more.

The test tubes aren't exact representatives of people and animals due to differences in shape and size ratio. Due to these variations, the way in which heat is lost from the test tubes will definitely be different to the actual heat loss of humans and animals. Modification: The experiment can be modified to obtain more accurate results by the following: * Carrying out each of the above experiments more number of times to order greater accuracy. * These factors could be studied together to deduce which factor has a larger affect on the rate of heat loss. For instance a beaker, which represents a short fat person, could be covered with wet tissue paper whereas a test tube representing thin tall people could be covered with dry tissue paper. Conclusion The investigation verifies our hypotheses as: * The tall thin body lost heat more quickly than the short fat body * The body wrapped in several thin layers of material lost heat more slowly than the one which was wrapped in one think layer of the material * The body with a wet surface lost heat more quickly than the one with a wet surface * The huddled together bodies did not lose heat as quickly as a single body * The body in water lost heat more quickly than the body in air ...read more.