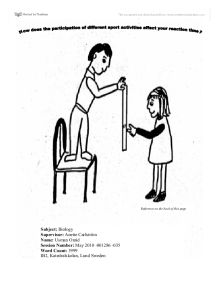 I had been participating in swimming, badminton and judo in the past so I knew that these were available as well. These were the sports that were chosen for my experiments. I also knew, from experience, that there would not be sufficient with people at one time in a club for me to be able to carry out this type of experiment, since it is suggested that 3009 individuals should be used so I decided to use only 20 subjects from each sports club. The 20 individuals from each sports club should be of different age and gender since previous studies show that gender and age affects reaction time.9 So the age and gender had to vary in all clubs so that the results would not be biased on the fact that there might be 20 young men doing the test from boxing while all swimmers were old ladies. I decided that out of these 20 individuals from each sports club, there should be 10 females and 10 males where 5 of each are in the age group 10-17 while the remaining half would be in the age group 18-40. The lower limit of first group was chosen because research shows that coordinative maturity comes before sexual maturity, at an age of about 11 years.13 The upper limit was chosen because of that one is considered an adult at the age of 18. The upper limit of the second group was just estimation because research shows that people seem most physically active at the age of 27 but after 30 it decreases.14 The ages were all just qualified estimations. I called and booked time with the sports clubs and asked if they could inform the participants to not consume anything for two hours before their training session the date I was supposed to attend. This had to be done because many nutrients affect the reaction time significantly- such as monosaccharides and caffeine. ...read more.

Of course I let her re-do the test but other similar distraction that I did not notice may have occurred. Since, as previously discussed, distraction is a factor affecting the reaction time this was fairly significant but still not very much so since it was probably just occasional and rare distractions and only individuals would be affected. 8. Improvements - Instead of finding 300 subjects to do the experiment, which would have been very hard, I could have spread out the experiment during a long period of time and instead taken repetitive test samples of the people they got in the various sports clubs that were included in the investigation. The people could have done far more tests instead, and that would have made the result a lot more precise and accurate. - If I had made sure that all the participants would have had approximately one minutes of rest before doing the test there would at least not have been a risk for them to be distracted by their breathlessness. - If the subjects had been removed from the practice area to a room nearby with windows and doors the major distractions could have been avoided at least. - Further control of the nutrient intake and sufficiency of sleep by making them sign a paper approximately one week before their reaction time test where they guarantee that they will have slept the minimum amount of time and not consumed anything in the given number of hours before the test. 9. Further Experiments - A relevant further experiment would be if one had done test on newcomers to a sport repetitively over a year to check if there would be any improvements. If there had been newcomers to all sports including a control group, the improvements could have been measured. This way we would in a clearer manner be able to see which sport really does improve one's reaction time the most. - Instead of using visual stimuli we could have used audio or sensational stimuli in order to get a reaction from the subjects. 10. ...read more.