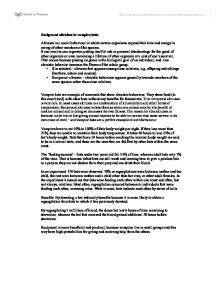 Reciprocal altruism in vampire bats Altruism is a social behaviour in which certain organisms expend their time and energy in caring of other members of the species. It can involve one organism putting itself at risk or personal disadvantage for the good of other organism or even increasing a lifetime of other organism at a cost of one's survival. That occurs because passing on genes is the biological goal of an individual, and also altruistic behavior increases the fitness of the whole group. � Kin selected - altruism that appears among close relatives, e.g. offspring and siblings (brothers, sisters and cousins) � Reciprocal altruism - altruistic behaviour appears generally towards members of the same species rather than close relatives. ...read more.

The reason for this altruism is because in the future the giving animal expects to be able to receive that same service in its own time of need - and vampire bats are a perfect example of such behaviour. Vampires have to eat 50% to 100% of their body weight per night. If they lose more than 25%, they are unable to maintain their body temperature. It takes 60 hours to lose 25% of bat's body weight. Bats that have 24 hours before reaching the minimal body weight are said to be in a critical state, and these are the ones that are fed first by other bats within the same roost. ...read more.

In the experiment it turned out that bats were feeding each other within one roost and often, but not always, relatives. Most often, regurgitation occurred between to individuals that were feeding each other, reversing roles. What is more, bats indicate each other by series of calls. Benefits: By donating, a bat indirectly benefits because it is more likely to obtain a regurgitation from bats to which it has previously donated. By regurgitating 5 milliliters of blood, the donor bat lost 6 hours of time remaining to starvation, whereas the bat that received the blood gained additional 18 hours before starvation. Reciprocal is more beneficial and practical, because vampires live in small groups and this way have high probabilities for giving and receiving help from the others. ...read more.