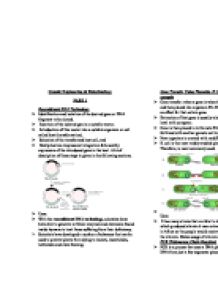 Genetic Engineering & Biotechnology PART 1 Recombinant DNA Technology > Identification and isolation of the desired gene or DNA fragment to be cloned. > Insertion of the isolated gen in a suitable vector. > Introduction of this vector into a suitable organism or cell called host (transformation). > Selection of the transformed host cell, and > Multiplication /expression/ integration followed by expression of the introduced gene in the host. A brief description of these steps is given in the following sections. > Uses: > With the recombinant DNA technology, scientists have been able to generate artificial enzymes and chemicals found inside humans to treat those suffering from their deficiency. > Scientists have developed a number of advances that can be used to prevent plants from dying to insects, insecticides, herbicides and even freezing. Gene Transfer Using Plasmids- E Coli must be used as an example > Gene transfer: when a gene is taken from organism A's DNA and then placed into organism B's DNA which then creates an effect for that certain gene. > Extraction of that gene is usually taken out by the molecular level with computer. ...read more.

DNA Profiling (DNA Fingerprinting) - include paternity and forensic investigations > DNA profiling: The matching of 2 segments of DNA to each other with aid from a gel electrophoresis chart. > Match is found by looking at the DNA patterns, lines and shading from the chart. Allows scientists to determine if the DNA is from one or two people. > Use: > For us to identify the clues for a crime scene. The process helps match DNA of the suspect to the criminals and provide concrete proof. This process is usually referred to DNA finger printing. Gene therapy- ex vivo and in vivo > Ex vivo and in vivo: the processes in which you surgically remove the diseased cells form an organism, and then replace them with the correct DNA in cultures. > The cell is then put back onto the organism i.e. liver cells replaced after Jaundice. > Ex vivo is gene therapy to the whole organism or animal > In vivo is to specific cells or tissue in an organism or animal. Both correct the old DNA from the diseased DNA. > > Use: > Simplest method to fixed damaged cells b/c it requires no drugs and capitalizes on the bodies regular healing of healthy DNA. ...read more.

Even though many researchers are against the idea, they see promising future in therapeutic cloning. GMO's 5 uses for transgenic bacteria: > Hepatitis B vaccine > Tissue plasminogen activator > Insulin > Human growth hormone > Interferon Several uses with specific examples for transgenic plants: > Parasite resistance to many crops. > Allows tomatoes to be resistance to cold temperature because of GM with arctic fish. > The ability to grow more versatile food in larger areas for cheaper prices. This is done by playing with the genes of i.e. corn and patenting and corn type with good genes. > Several uses with specific examples for transgenic animals * Transgenic sheep can produce factor IX and help people with haemophilia. The IX factor can help increase creation of protein. * List the potential benefits and possible harmful effects of one example > GM are more versatile, and require less fertilizer than organic. > Farmers gain control of foods that are given to their livestock. > They have in their farm. They can get more money per GM crop than non GM crop. > The long term effects are unknown because this is a new type of research. > GM crops become invasive, dominant species. ...read more.