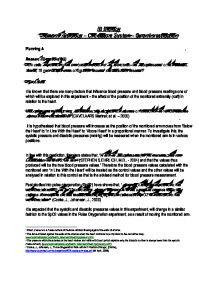 Research Question (RQ) How does the position of the arm (cuff) in relation to the heart, affect the blood pressure[1] of non-diabetic, female, 16 year olds, in terms of Systolic Pressure[2] and Diastolic Pressure[3]?

- as is the correct way to monitor blood pressure - it produced the middle value; and that when the cuff is parallel to the body and resting by the side, it results in the highest blood pressure reading. It can be concluded from these results that to obtain accurate and consistent blood pressure readings, it is important to implement the proper arm position - with the monitored arm perpendicular to the body, with a slightly flexed elbow - to correctly determine blood pressure levels with a wrist pressure monitor. Error/Limitation Impact / Significance Improvements The experiment wasn't repeated an adequate amount of times so there wasn't enough data and the data may be inconsistent. There wasn't enough data and the data that was used, was inconsistent. I propose that this experiment be repeated 3 more times so that the data that is collected is more consistent. The CASCADE Blood Pressure Monitor kept coming up with an ERROR message. This resulted in the subject holding their arm (cuff) in a position for a longer period of time. Because they had to hold their arm in a position for longer, it may have affected their results more than the others and this would have resulted in the discrepancies and outliers. I propose that another electronic piece of equipment that is more reliable be used. An example of such a piece of equipment is the Pasco data logger - with heart rate monitors. Because the subject's got bored, annoyed and agitated with having to hold their arm in uncomfortable positions for a consistent period of time, they became distracted and began running around and not remaining in one position for the duration of the experiment. This may have affected the results as because they were moving - and moving quickly - their heart rate and subsequently their blood pressure would have increased. This would have resulted in incorrect data. I propose that next time this experiment is undertaken, the subjects are required to be in a seated as opposed to standing position for the duration of the experiment. ...read more.