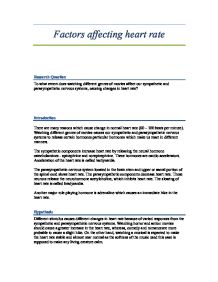 Research Question To what extent does watching different genres of movies affect our sympathetic and parasympathetic nervous systems, causing changes in heart rate?

* The gap between 2 clippings (3 min for rest after each movie clipping is viewed and the pulse has been recorded) Uncontrolled Variables * Subjects may not necessarily be concentrating on the movie * A 10 minute clipping may not necessarily always create the required change in mood. Materials Required Stopwatch 5 Movies (one from each of the genres noted above) 6 subjects Procedure a) Make the subject relax and rest for 5 minutes. b) Take the normal pulse. c) Now, show a 10 minute clipping of the horror movie and take pulse of the subject at the climax of the movie clipping. Allow the subject to relax for 3 minutes after the first clipping before introducing the second, thus, allowing the heart rate to go back to normal. d) Repeat the steps for all the subjects for all other genres and note the observations. ...read more.

Musical movies showed an expected result, whereas, romance triggered a higher heart rate than was expected in the hypothesis. This proves heavy involvement of the sympathetic nervous system in the genre of romance also. In conclusion, the reaction to the movies (stimulus) arises from the sympathetic nervous system of our brain, thus, increasing the heart rate in most cases. Whereas, the parasympathetic nervous system comes into function after the stimulus has been removed, thus, bringing the body back to rest position by lowering the heart rate. I felt that the data was different for each person, thus, we cannot generalize a particular pattern as a universal result. Also, it was not necessary that the subjects were concentrating only on the movie clippings. To get a better result, the clippings should have been longer and the subjects should have been exposed to more number of clippings in the same genre, thus, giving more readings from which an average can be obtained, hence, giving us a better view and helping us to formulate a particular pattern in occurrence. ?? ?? ?? ?? ...read more.