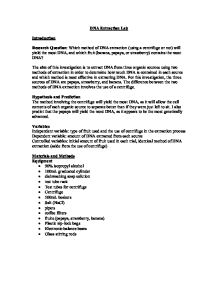 Research Question: Which method of DNA extraction (using a centrifuge or not) will yield the most DNA, and which fruit (banana, papaya, or strawberry) contains the most DNA?

DNA Extraction Lab Introduction Research Question: Which method of DNA extraction (using a centrifuge or not) will yield the most DNA, and which fruit (banana, papaya, or strawberry) contains the most DNA? The aim of this investigation is to extract DNA from three organic sources using two methods of extraction in order to determine how much DNA is contained in each source and which method is most effective in extracting DNA. For this investigation, the three sources of DNA are papaya, strawberry, and banana. The difference between the two methods of DNA extraction involves the use of a centrifuge. Hypothesis and Prediction The method involving the centrifuge will yield the most DNA, as it will allow the cell contents of each organic source to separate better than if they were just left to sit. I also predict that the papaya will yield the most DNA, as it appears to be the most genetically advanced. Variables Independent variable: type of fruit used and the use of centrifuge in the extraction process Dependent variable: amount of DNA ...read more.

Statement of improvement: This lab could be improved by using a better filtering system. The coffee filters left too much liquid with the solid it strained. Perhaps a stronger filter would be better, as the remaining solid could be pressed and yield more liquid. The DNA invariably contained fluid when it was extracted, so drying the pure DNA before recording its mass would remove that extraneous mass. Utilizing a blender or another more efficient method of pulverizing the fruit would yield more DNA, as it would break all cells. Learning Statement: What I learned from this experiment was that the inclusion of one additional step (with the centrifuge) could have a profound effect on the amount of DNA yielded. I learned that the centrifuge separates the contents of a solution far more effectively than letting the solution sit. I also learned that polyploidy plays a role in the amount of DNA contained in each fruit, as the fruit with the most chromosomes yield the most DNA. This experiment shows the importance designing an experiment with the right procedures, as the omission of one step produced a much lower percent yield of DNA. ...read more.