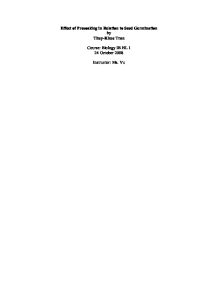 Effect of Presoaking in Relation to Seed Germination by Thuy-Khue Tran Course: Biology IB HL 1 24 October 2008 Instructor: Ms. Vu Introduction A well designed experiment is essential in order to establish the effect of presoaking in relation to seed germination. The purpose of the lab is to determine if presoaking causes any changes in seed germination. In seed dormancy, development and activity of seeds are suspended; therefore, seed dormancy must be broken for the embryo to begin maturing. Favorable conditions are vital for a seed to germinate and grow. The favorable conditions include a beneficial temperature, water, oxygen and light. However, seeds that are water logged or buried too deep will not germinate due to the lack of oxygen. When germination is successful, the seeds imbibe water which results in energy production that causes the embryo to grow out of the seed coat. If seeds are presoaked for a longer length of time, then the seeds will have a greater chance of germination than seeds that have not been presoaked as long. ...read more.

Therefore the amount of time the beans are soaked is the independent variable. The time length is varied from 7 different hours. 3. Once they were labeled with the black marker, every cup except the 72 hour cup was set aside 4. The cup was filled with water and set aside in a well lit area 5. Twelve hours later, the same process in step 3-4 was repeated with the 60 hour cup 6. Step four was repeated in ascending order for 48 hours to 12 hours in twelve hour intervals leaving the control aside 7. The zero hour group was put aside without presoaking; it is the control because water was not added. Beans that go without presoaking is the closest to the natural condition. 8. The 7 bags were labeled according to the hours that they were soaked 9. Once the cup that soaked for 12 hours completed its time, they were collected and drained 10. The 7 napkins were dampened with water 11. Without squeezing the water from the napkins, the 7 groups of beans were placed onto the 7 wet napkins. ...read more.

The bar graph above compares the number of seed germination amongst the different groups. Conclusion The beans that were soaked for zero hours produced the most germinated beans. That specific group yielded 12 germinated beans while the other groups produced less than 4 germinated beans on average. Beans that were presoaked the most only had one bean germinate. Most of the beans germinated on day 2, day 3 and day 4. The results refute the hypothesis that if the seeds are presoaked for a longer length of time, then the seeds will have a greater chance of germination than seeds that have not been presoaked as long. Based on the experiment, presoaking negatively effects seed germination. Potential causes are the beans received too much water hence causing them to imbibe profusely. Evaluation The method proved to be faulty because the amount of the water in the napkin was not measured. It varied from group to group which could have affected the results. To prevent this mistake, the water to dampen the napkins will be measured. Due to the results of the investigation, a further study can be conducted either on the rate of seed germination in different temperatures or on seed germination and exposure to light. ?? ?? ?? ?? ...read more.