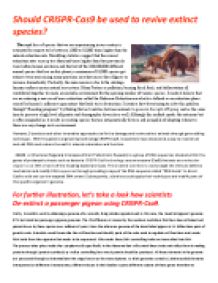 Should CRISPR-Cas9 be used to revive extinct species?

﻿Should CRISPR-Cas9 be used to revive extinct species? The rapid loss of species that we are experiencing in our century is estimated by experts to be between 1,000 to 10,000 times higher than the natural extinction rate. Horrifying statistics suggest that the current extinction rates sum up to a thousand times higher than they previously were before human existence and that out of the 100,000,000 different animal species that live on this planet, a minimum of 10,000 species get extinct every year raising many questions on what causes these figures to increase dramatically. Factually, the main reason is due to the sabotage humans enforce on our natural eco-system. Many Factors as pollution, burning fossil fuels, and deforestation all contributed together to create an unstable environment for the uprising number of various species. Scientists believe that we are entering a new era of mass extinction called the Holocene Extinction era which is defined as an extinction phase caused by human?s influence upon nature that leads to its destruction. Scientists have been trying to solve this problem through? Breeding programs? by finding the best matches between animals to generate the right offspring and as the same time to preserve a high level of genetic and demographic diversity as well. ...read more.

as well as controlling how much protein should be produced. All these elements in the genome are processed through an intermediate RNA stage known as the transcriptome. As Birds genomes contain 17,000 encoded elements interspersed on different chromosomes, different tissues in their bodies express different subsets of these genes therefore to discover and map them all scientists sequence RNA from multiple tissues. Once the RNA is sequenced, the resulting reads can be mapped to the DNA reference assembly to identify and map the positions of genes and regulating elements. Accordingly, after information is obtained, we compare and contrast the differences between the genomes of the two pigeons. Once the differences are identified, codes will be synthesized through a process known as DNA printing ? making the genetic code into viable DNA molecules that can be utilized to edit the genomes of band tailed pigeons . https://lh3.googleusercontent.com/URh8DReqxHb4VPkIzg_0ol5AjyAwuCqG3oIICZEWCU8aOe6FmNWGI1RJja3eYFFOuSRyr4BGo4udqdexgt_xIAk3qCd3crQPn0H6ICtCNRtBJuIE2D40WUsiUgsWaIfErJYWbT6cHOQSGgDrkA Finally,The primordial germ cells in the Band tailed pigeon are isolated from its embryo, then grown in a culture where they are engineered. That?s when the Crispr-cas9 gene comes handy and uses its function to cut off the band-tailed pigeon?s gene where the homologous recombination (the cell?s own DNA repair mechanism) ...read more.

Pros There are positive aspects for this solution too .Scientifically speaking we can save up 0.1% of species yearly via de-extinction. We can?t deny the fact that bringing extinct species back to life increases biodiversity, fulfills missing ecological niches and important for the overall functioning of an ecosystem. For example the giant ground-sloths fed on large foods and nuts, these fruits and nuts such as avocados relied on those sloths for seed dispersal, Passenger Pigeon is known as the ecosystem engineer sewing different parts of habitat dynamics that eastern biomes depend on on. By de-extinction many animals could help restore long lost ecological patterns. Conclusion CRISPR cas-9 technology is far more accurate than other techniques such as cloning that produce genetically analogous organism through asexual reproduction .Cloning has a 40% chance of working compared to CRISPR. . Not onlyUsing CRISPR-Cas9 technology will reduce unintended mutations and unwanted errors it also proved to be more practical and efficient comparing to other techniques used to de-extinct animals. Finally, despite the environmental disadvantages, these problems would resolve over time once humans map out some environments that could potentially be similar to the extinct animal?s previous environment. Furthermore, he ecological benefits this process has to offer definitely override the disadvantages and CRISPR-Cas9 should definitely be used to de-extinct animals. ...read more.