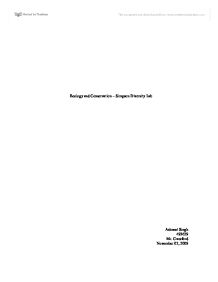 Ecology and Conservation - Simpson Diversity Lab Ashneet Singh 493629 Mr. Crawford November 02, 2009 Purpose: Using statistics to determine the correlation of plant population between the rugby and football fields at school. Introduction: The Simpson Diversity Index (SDI) is used to analyze the biodiversity of two local communities. In this investigation, students were required to use the SDI to compare the biodiversity of the rugby and football fields, with the use of cameras and the computer software, Logger Pro 3.8. The data will be collected from random placement of 10 quadrats in both fields, and thus will be required to estimate, based on the diversity of the quadrats, the overall diversity of each field. The following is the mathematical relationship used in this activity: SDI = Where 'N' = total number of organisms of all species found in the field. 'n' = number of individuals of a particular species. The T-test will further be used to compare the two sets of data to see if they are the same or different, with the critical P level at P = 0.05 (5%). The null hypothesis is accepted when the value is above 0.05, stating that the data is the same. However, is rejected when it is below 0.05, stating that the data is different from each other. Hypothesis: There is significant difference between the biodiversity of plant species/flora found in the rugby and football fields. Variables: Dependant - greater population of species provides for Intraspecific and Interspecific competition, resulting in a the dominance of fewer types of species, thus less biodiversity. ...read more.

For example, the football field is used a lot more often in practices and thus has its flora damaged or affected by human interference at a higher level than the rugby field, which does not have as much interference, and the plants are left a lot more secure. The plants, dandelions and plantain, are steady from their stem as they grow in the similar form of rosettes, which make them strong enough to handle to pressure of the feet of humans, and can thus last these conditions. Whereas flora such as clovers and crab grass, which are very weak in physical nature would not last such interference and are thus nonexistent in the football field. This allows for the dominant plant, dandelion to increase in population, also slightly due to decreased interspecific competition. Even though the method seems very simple to use and achieve easy results, there are some weaknesses that may have altered the interpretation of the quadrat. On possible weakness in the method of this activity is the way in which the camera was used to take images for future use. Using a camera, one is unable to observe the details of each section of the quadrat and is unable to clearly distinguish between what is a plant and what is grass, or what plant species it may actually be. As stated in the qualitative observations, many images from the camera did not provide a clear cut image of each individual plant species, and for example, made it difficult to distinguish between grass and small dandelion plants. ...read more.