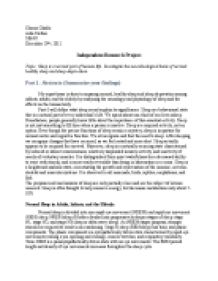 Sleep is a normal part of human life. Investigate the neurobiological basis of normal healthy sleep and sleep-deprivation.

﻿Cherno Okafor Aida Stefani SBI4U December 29th, 2012 Independent Research Project Topic: Sleep is a normal part of human life. Investigate the neurobiological basis of normal healthy sleep and sleep-deprivation. Part 1: Abstracts (Summarize your findings) My report/issue is about comparing normal, healthy sleep and sleep deprivation among infants, adults, and the elderly by analyzing the neurology and physiology of sleep and the effects on the human body. First I will define what sleep is and explain its significance. Sleep is a behavioural state that is a natural part of every individual?s life. We spend about one-third of our lives asleep. Nonetheless, people generally know little about the importance of this essential activity. Sleep is not just something to fill time when a person is inactive. Sleep is a required activity, not an option. Even though the precise functions of sleep remain a mystery, sleep is important for normal motor and cognitive function. We all recognize and feel the need to sleep. After sleeping, we recognize changes that have occurred, as we feel rested and more alert. Sleep actually appears to be required for survival. Moreover, sleep is a naturally recurring state characterized by reduced or absent consciousness, relatively suspended sensory activity, and inactivity of nearly all voluntary muscles. It is distinguished from quiet wakefulness by a decreased ability to react with stimuli, and is more easily reversible than being in hibernation or a coma. Sleep is a heightened anabolic state, accentuating the growth and rejuvenation of the immune, nervous, skeletal and muscular systems. It is observed in all mammals, birds, reptiles, amphibians, and fish. The purposes and mechanisms of sleep are only partially clear and are the subject of intense research. Sleep is often thought to help conserve energy, but decreases metabolism only about 5-10% Normal Sleep in Adults, Infants, and the Elderly: Normal sleep is divided into non-rapid eye movement (NREM) ...read more.

Dreaming is stimulated by the pons and mostly occurs during the REM (active) phase of sleep. Effect of food and drink on sleep: 1. Hypnotics: Some people often drink alcohol in order to get to sleep, however being addicted to alcohol can actually lead to disrupted sleep because alcohol has a rebound affect later in the night and it can reduce REM sleep. Similarly, marijuana is used by some people to induce sleepiness however reduced REM sleep and usually affects people in the sense that they are not able to recall their dreams after excessive marijuana. Melatonin is a naturally occurring hormone that regulates sleepiness. It is made in the brain, where tryptophan is converted into serotonin and then into melatonin, which is released at night by the pineal gland to induce and maintain sleep. Melatonin supplementation may be used as a sleep aid. 2. Stimulants: The stimulant of cocaine or crack cocaine is related to the onset of hypersomnia (oversleeping). Tobacco has been found not only to disrupt but also reduce total sleep time and hence more daytime drowsiness in smokers than in non-smokers. Insomnia Insomnia is a general term for describing difficulty falling asleep and staying asleep. Insomnia can have many different causes including psychological stress, a poor sleep environment, an inconsistent sleep schedule, or excessive mental or physical stimulation in the hours before bedtime. Insomnia is often treated through behavioural changes like keeping a regular and consistent sleep schedule, avoiding stimulating or stressful activities before bedtime, and cutting down on stimulants such as caffeine. Patients are often counselled to improve their sleep environment by installing heavy drapes to shut out all sunlight, and keeping computers, televisions and work materials out of the sleeping area. Some scientific research has suggested that exercise generally improves sleep for most people, and helps sleep disorders such as insomnia. The optimum time to exercise may be 4-8 hours before bedtime, though exercise at any time of the day is beneficial, with the exception of heavy exercise taken shortly before bedtime, which may actually disturb sleep. ...read more.

For other people, this change in time can mean more sleepiness and reduced concentration as it damages people?s sleep. In fact, researchers have proposed tips for daylight-saving times in the spring: 1. Reset all your clocks on the Saturday before the switch 2. Get a full night?s sleep during the switch 3. Follow your conventional bedtime to ensure you get a full goodnight?s sleep-meaning you are getting up one hour earlier, so it is imperative to go to bed one hour earlier 4. Resist the temptation to catch a nap in the middle of the day on Sunday, it can disrupt your biological clock Some researchers indicate that the switch on daylight-saving times begins to initiate bad sleeping habits which relates to what was discussed earlier. http://www.everydayhealth.com/sleep/101/benefits-of-good-sleep.aspx This article is about the significance of healthy sleep habits and the affect on the neurology of the brain of humans. Healthy sleep habits do more than just keep you alert- they can also keep you healthier. Getting more sleep might even make you a better employee or student. These healthy sleep habits generally allow people to wake up feeling refreshed, think quickly, successfully perform potentially dangerous tasks such as driving, which requires complete attention, and do your very best at work or school. The dangers of ignoring healthy sleep habits relate to sleep deprivation in many ways. It can lead to cardiovascular dysfunction, lowered immune system response, glucose and insulin abnormalities (diabetes) deregulation of hormones which control appetite, and impaired cognitive function. The implications are serious as bad sleep habits can cause mental impairments to accidents. Other causes of bad sleeping habits/deprivation researchers have hypothesized are: loss of energy and feelings of exhaustion, anxiety, depression or irritability, memory problems, trouble paying attention, delayed reactions, and reduced ability to learn (particularly at school), and impaired ability to think fast and avoid mistakes or accidents, and perhaps a limited ability to multitask. Kids are more vulnerable to sleep disruptions because their bodies are still developing and they are of a young age, so precautions must be taken. ...read more.