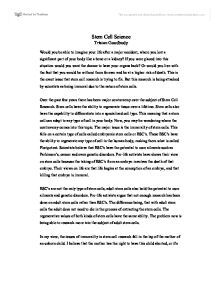 Stem Cell Science Tristan Goodbody Would you be able to imagine your life after a major accident, where you lost a significant part of your body like a bone or a kidney? If you were placed into this situation would you want the chance to have your organs back? Or would you live with the fact that you would be without them forever and be at a higher risk of death. This is the exact issue that stem cell research is trying to fix. But this research is being attacked by scientists as being immoral due to the nature of stem cells. ...read more.

These ESC's have the ability to regenerate any type of cell in the human body, making them what is called Pluripotent. Scientists believe that ESC's have the potential to cure ailments such as Parkinson's, cancer and even genetic disorders. Pro-life activists have shows their view on stem cells because the taking of ESC's from an embryo involves the death of that embryo. Their views on life are that life begins at the conception of an embryo, and that killing that embryo is immoral. ESC's are not the only type of stem cells; adult stem cells also hold the potential to cure ailments and genetic disorders. Pro-life activists argue that not enough research has been done on adult stem cells rather than ESC's. ...read more.

I believe that the mother has the right to have this child aborted, or if a still birth occurs, have the stem cells removed from the child to be used for research or for the benefit of society. I know that this issue is especially controversial within the religions of the world. Abortion is an issue that runs side by side with stem cell research. But as I have stated before I believe that the choice should be given to the mother as to how the cells are used, or not used at all. Mass production of stem cells should not be employed. A system similar to that of organ donation should be implemented where you are place on a list of viable stem cell patients to receive your treatment. ...read more.