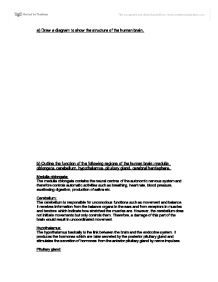 Structure and functions of the human brain

a) Draw a diagram to show the structure of the human brain. b) Outline the function of the following regions of the human brain: medulla oblongata, cerebellum, hypothalamus, pituitary gland, cerebral hemisphere. Medulla oblongata: The medulla oblongata contains the neural centres of the autonomic nervous system and therefore controls automatic activities such as breathing, heart rate, blood pressure, swallowing digestion, production of saliva etc. Cerebellum: The cerebellum is responsible for unconscious functions such as movement and balance. It receives information from the balance organs in the ears and from receptors in muscles and tendons which indicate how stretched the muscles are. However, the cerebellum does not initiate movements but only controls them. Therefore, a damage of this part of the brain would result in uncoordinated movement. Hypothalamus: The hypothalamus basically is the link between the brain and the endocrine system. It produces the hormones which are later secreted by the posterior pituitary gland and stimulates the secretion of hormones from the anterior pituitary gland by nerve impulses. ...read more.

In the earlier years of brain research tests have been done on animals, preferably primates as their brain has the most similarities with a human brain. For the experiments scientists had to remove parts of the skull to get access to the brain. The animals were then either given stimuli or they had small parts of the brain removed after which the scientists observed what effects these surgical processes had on the behaviour of the tested animal. However, in order to be able to observe the animals the experiments had to be carried out on living animals, called vivisection. During such procedures many animals suffered or even died. Obviously many scientists and animal right activists had ethical objections to the experiments so that they were performed more rarely. In the 1890s scientists discovered a new method to observe brain functions: they observed brain lesions, damaged areas in the brain, to study the functioning of the brain. ...read more.

First a high-resolution scan of the person or object to be observed is taken before the subject of the experiment is given a stimulus and a series of low-resolution scans are taken. On these scans changes in the blood flow in the brain can be seen and the areas can be linked to a specific function. For example, if people have to follow a moving object on a screen with a cursor, this requires the coordination of sight, eye movement and hand movement and thus the region which coordinates these receive increased blood flow which can be clearly seen on fMRI scans taken from people performing such an action as on the picture below. The advantages of the fMRI scanning technique is that it can be done on healthy human individuals; scientists do not rely anymore on ill people having brain lesions and they do not have to sacrifice animals anymore, instead they can do repeated studies on humans and also animals without there being any ethical objections to it. ...read more.