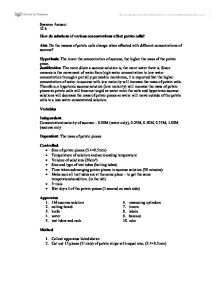 That way, we will have a more accurate graph and we will get a more accurate estimation for the isotonic point. Since we had to consider the amount of time we were given, we could only do 3 trials More accurate results could be obtained if we worked on more than 3 trials. For example, 5 trials. The more trials we have, the more valid the average will be. This could also help defeat any anomalies in the raw data. One of the uncertainties that have been identified is the measurement of water and sucrose. To defeat the uncertainty, it more accurate to use a longer and thinner measuring cylinder than the 100cm� that was used. If possible it could be more accurate to use a burette or a pipette. Conclusion The experiment that I have conducted has given me valid results. After calculating the results and graphing the percentage change of the mass of the potato pieces, my hypothesis was proven to be correct. From the negative correlation that my graph has shown, I can confirm that as the concentration of sucrose increase, the mass of the potato pieces will decrease. ?? ?? ?? ?? Syazana Asmuni 12 b ...read more.