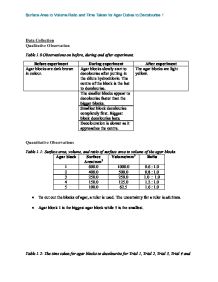 Data Collection Qualitative Observation Table 1.0 Observations on before, during and after experiment. Before experiment During experiment After experiment Agar blocks are dark brown in colour. Agar blocks slowly start to decolourise after putting in the dilute hydrochloric. The centre of the block is the last to decolourise. The agar blocks are light yellow. The smaller blocks appear to decolourise faster than the bigger blocks. Smallest block decolourise completely first. Biggest block decolourise lasts. Decolouration is slower as it approaches the centre. Quantitative Observations Table 1.1: Surface area, volume, and ratio of surface area to volume of the agar blocks. Agar block Surface Area/mm2 Volume/mm3 Ratio 1 600.0 1000.0 0.6 : 1.0 2 400.0 500.0 0.8 : 1.0 3 250.0 250.0 1.0 : 1.0 4 150.0 125.0 1.2 : 1.0 5 100.0 62.5 1.6 : 1.0 * To cut out the blocks of agar, a ruler is used. The uncertainty for a ruler is �0.5mm. * Agar block 1 is the biggest agar block while 5 is the smallest. Table 1.2: The time taken for agar blocks to decolourise for Trial 1, Trial 2, Trial 3, Trial 4 and Trial 5 Time taken for blocks to decolourise/s (�0.01s) ...read more.

Substances moves into the cell to be used as fuel for the reactions that occur within cell, collectively known as the cell metabolism. Products of these reactions (waste substances) need to be removed out of the cell in order for metabolism to continue. These two processes (substances moving in and out of cell) depend on the cell's surface area to volume ratio. This is due to the fact that the metabolic rate of the cell is directly proportional to the cell's volume, hence the chemical activity per unit time. On the other hand, the rate at which substances move in and out of the cell depends on the cell surface area. The chemical activity of a cell increase as the cell size increase, as more substances needs to be taken in and to be removed. As the cell increase in size, so will the volume and the surface area of the cell, but not to the same extent. As shown above, as cell gets bigger, the surface area to volume ratio gets smaller. This is proven when agar block 1 (the biggest agar block) ...read more.