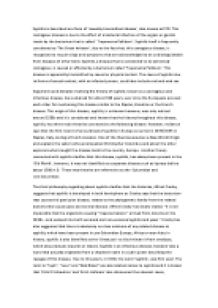 Syphilis, a disease that is considered to be extremely contagious, is caused or affected by a bacterium called Treponema Pallidum.

﻿Syphilis is described as a form of ?sexually transmitted disease?, also known as STD. This contagious disease is due to the effect of a bacterial infection of the organs or genital tracks by the bacterium that is called ? Treponema Pallidum?. Syphilis itself is frequently considered as ?The Great Imitator?, due to the fact that, this contagious disease, is recognized to require sings and symptoms that are acknowledged to be undistinguishable from diseases of other kinds. Syphilis, a disease that is considered to be extremely contagious, is caused or affected by a bacterium called ?Treponema Pallidum?. This disease is apparently transmitted by sexual or physical contact. The cause of syphilis due to forms of sexual contact, with an infected person, could also include oral and anal sex. Arguments and debates involving the history of syphilis, known as a contagious and infectious disease, has sustained for almost 500 years, ever since the Europeans accused each other for mentioning this disease similar to the Naples, Venetian or the French disease. This origin of this disease, syphilis, is unknown however, was only noticed around 1500s and it is considered and known that the history throughout this disease, syphilis, has three main theories connected to the following disease. However, evidence says that the first record of an outbreak of syphilis in Europe occurred in 1494/1495 in Naples, Italy, during a French invasion. ...read more.

It is also known that the causes of syphilis can also be transmitted from infected mothers to their newborns, however with routine screening, this transmission has nearly been vanished. Syphilis, a contagious, infectious and horrifying disease, which is caused or infected by a bacterium called ?Treponema Pallidum?, has various symptoms and signs connected to any human being, who is considered to have this form of disease. This so-called disease, syphilis, is considered and characterized by four stages, which includes: primary, secondary, latent and tertiary. All of these four stages is known to have its own signs and symptoms of one catching syphilis, or perhaps recognized to catch this contagious disease. It has been identified and researched that once a person, whether he or she, has become infected with syphilis, there is an incubation time between 9 to 90 days before its? first signs and symptoms starts to react, resulted this disease to appear. Syphilis is a disease that is also hard to tell when this disease has infected a person, however, each four stages have their own characteristic symptoms. The first symptoms stage is the primary stage. In this stage, signs of syphilis will have the effect of sore on the skin called ?Chancre?, swelling of the lymph nodes in the groin may occur, small painless sore that can be described as a pimple, blister, a flat, wet wart or an open sore. ...read more.

Syphilis has long-term effects that could lead to major problems of a human?s life and health. If a person is left untreated to this disease, secondary syphilis may progress into the tertiary stage, which would result to damage the internal organs of the human body. The effect that would damage the organ are our: 1. Brain 2. Nerves 3. Eyes 4. Blood Vessels 5. Liver 6. Bones 7. Joints 8. Skins In extreme cases, syphilis can create: 1. Difficulty coordinating muscle movements 2. Paralysis 3. Numbness 4. Gradual blindness 5. Mental illness The treatment of syphilis begins with seeking regular medical care throughout a person?s life, as syphilis is a disease that is considered to be curable and easily treated in its early primary and secondary stages. The most common treatments that is required in order to heal or treat an individual with this infectious disease, syphilis, are mainly penicillin and antibiotics which are often injected into the body of a person. However, it is acknowledged that if a person, suffering from this disease, is in its high stages of symptoms, it is hard to be treated and cure, however, additional high doses of penicillin and antibiotics are required. Also it is known that if an individual is allergic to penicillin or either antibiotics, it is said that he or she could also be treated by antibiotics to take by mouth, however, lesions could be treated but the damage that has already been done can not be treated and is contagious. ...read more.