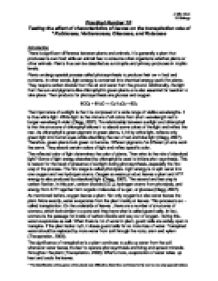 Testing the effect of characteristics of leaves on the transpiration rate of * Rubiaceae, Verbenaceae, Oleaceae, and Rutaceae

Practical Number 10: Testing the effect of characteristics of leaves on the transpiration rate of * Rubiaceae, Verbenaceae, Oleaceae, and Rutaceae Introduction There is significant difference between plants and animals. It is generally a plant that produces its own food while an animal has to consume other organisms whether plants or other animals. Plants thus can be classified as autotrophs and primary producers in trophic levels. Plants undergo special process called photosynthesis to produce their own food and nutrients. In other words, light energy is converted into chemical energy useful for plants. They require carbon dioxide from the air and water from the ground. Additionally, the light from the sun and pigments like chlorophyll in green plants are also essential for reaction to take place. Then products for photosynthesis are glucose and oxygen. 6CO2 + 6H2O � C6H12O6 + 6O2 The importance of sunlight is that it is composed of a wide range of visible wavelengths. It is thus white light. White light is the mixture of all colors from short-wavelength red to longer-wavelength violet (Clegg, 2007). The relationship between sunlight and chlorophyll is that the structure of chlorophyll allows it to absorb some colors of the light and reflect the rest. As chlorophyll is green pigment in green plants, it, hit by white light, reflects only green light into human eyes while absorbing the rest of red and blue light (Clegg, 2007). Therefore, green plants look green to humans. Different pigments for different plants work the same. They absorb certain colors of light and reflect specific color. The reflected color of light determines the color of plants. Then what is the role of absorbed light? Some of light energy absorbed by chlorophyll is used to initiate photosynthesis. This is reason for the need of presence of sunlight during photosynthesis, especially the first step of the process. The first stage is called photolysis. ...read more.

What is more, wet branch slowed down transpiration rate. In other words, the first trial with dry branch had the fastest transpiration rate in a minute, compared to the rest of four trials. The insertion of branch into a rubber tubing was not always perfect. Thus, some water leaked from the crack between two. Though for the solution to that, vaseline was used, it was not that helpful. *Rubiaceae had spider nest on its surface of leaf. This somehow would have effect on transpiration rate because the process happens at the surface of leaves. The surface hidden under the nest would not have transpired as much. In fact, as time and trial goes, the skill of removing air bubble out improved. For the *Oleaceae, it was the first time to do experiment. It took much more time and had so various values than the last experiment was conducted. The last experiment was for *Rubiaceae. Except for the outlier 1.6 due to only dry branch, all the trials were precise and close to each other. Graph 1: the volume of water uptake (cm3) per minute per m2 by four different species of plant (*Rubiaceae, Verbenaceae, Oleaceae, and Rutaceae) Note: Error bars- data range Each mean is drawn in bar graphs, and the highest and lowest transpiration rate result for each plant is shown around it. Conclusion As mentioned in hypothesis, different species have different transpiration rate from each other. This can be proven by the data above clearly in Graph 1. The plant from Rubiaceae family took 0.7639 mL of water per minute per m� while 0.9512 mL was absorbed for Verbenaceae, 0.2678 mL for Oleaceae, and 0.1297 mL for Rutaceae according to Table 3. This is because all four species have different leaves. Of all features of leaves having effect on transpiration, the thickness of cuticles and stomatal complex are essential. Cuticles are hydrophobic waxy layers on the surface of plant and thus make water to move not easily through leaves (Transpiration, n.d.). ...read more.

Since the syringe can be detach from the potometer, it is possible to pull water up to the end and push the plunger back all the way to the other end to remove all air bubbles. Then fill the syringe up with water again and connect it to the three-way tap. Now water from the syringe would get rid of all air bubbles stuck in the passage when the tap is adjusted properly. In regards to the error of wet and dry state of branch and leaves, it seems the best way to just wait until the wet branch dries. The paper towel to dry those would be helpful for reducing the waiting time. Similar to the method right above, it is important to eliminate any water, dust, or even spider nest out of the surface of plant. These blocked stomata and prevented transpiration from occurring at the spot. The matter of suitable insertion of branch into a rubber tubing could be resolved by having different size of rubber tubings, cutting the branch at the same thickness as the rubber tubing. As temporary expedient, vaseline can be used. This will prevent the leaking of water from the crack between the branch and rubber tubing. The next step for improved laboratory is to repeat as much as possible. As long as biology is concerned, variations are inevitable. Just to decrease the variations, size of error bars, and standard deviation, many repetitions are required. The more there are repetitions, the greater possibility there is that the results get closer to the expected outcome. For future research, more than four families of plant species can be data range, which would give more information. Since this laboratory experiment is quite superficial in that it only identifies the differences in transpiration rate, deeper consideration is required on how the differences come from. It would be better not only to check the appearance of leaves but also the quantitative data for example like the thickness of waxy cuticles and stomatal size as in other experiments done by others. ...read more.