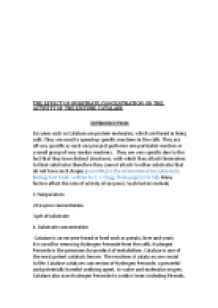 Testing the effect of substrate concentration on enzymes

Also, because different syringes were used, it took more time for some of the syringes to start moving because some of them were relatively tighter as compared to the others. Below is a table to illustrate the errors, how they affected the experiment and steps to improve upon it next time. ERROR EFFECT ON THE EXPERIMENT HOW TO IMPROVE ON IT NEXT TIME 1. The concentrations used Due to the minimal amount of concentrations used, the hypothesis could not be met in full since the later part which requested the reaction rate to remain the same was not observed More and higher concentrations of the solutions should be used in the next experiment. 2. Delay between adding the enzyme and the substrate, placing the stopper on the test tube and starting the stop watch This reduced the accuracy in the amount of gas produced in the given time One or more people should be invited to help out with the experiment so that the stopwatch, adding the substances and placing the stopper on the test tube will all be done simultaneously. 3. Limited number of trials in the experiment This takes a little from the validity of the experiment since conducting more trials will increase how valid the data obtained will be Run more trials in successive experiments for more data and validity of the experiment 4. The reaction started on the walls of the test tube hence some of the oxygen produced was lost This reduces the accuracy in the actual time taken to produce the actual amount of oxygen required. In further experiments, funnels should be used to transfer the solution from the measuring cylinder so that it will fall directly to the base of the test tube, without wetting the sides. 5. The difference in how freely the syringe moves. ...read more.