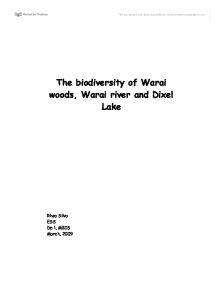 The biodiversity of Warai woods, Warai river and Dixel Lake. Observing the flora and fauna in different ecosystems and determining the biotic and abiotic factors influencing them.

The biodiversity of Warai woods, Warai river and Dixel Lake Rhea Silva ESS Dp 1, MBIS March, 2009 Observing the flora and fauna in different ecosystems and determining the biotic and abiotic factors influencing them. Discussion: Biodiversity is the number of different varieties of species living in one ecosystem. Hence if there are many kinds of different species living in an ecosystem, the biodiversity is higher. Higher biodiversity increases the survival rate of the species. This is because, if one particular species is contaminated, extinguished or diseased; there is still a chance for the predators to feed on other species and not be dependant on one type of species for their survival. For example: Mosquitoes were the only insects available for lizards to feed on, and due to human influence in that area, all the mosquitoes died and the lizards were unable to catch prey and hence would fight for their existence. ...read more.

The Warai woods would have a reasonably high biodiversity because it is a dense forest thus allowing for animals to live and plants to grow peacefully without much human interference. There would be no variables in this practical since no factors are being investigated. Fauna found in all three ecosystems: Jatropha (shameless), Argemone, Polygonum, Spirogyra, Carissa, Lichen, Leucena (Subabul), Erythrina, Teak, Pink Flower, Acacia. (The pictures of these flowers are at the back of the report.) Fauna found in all three ecosystems: Woods: house crow:Corvus splendens, jungle crow: Corvus macrorhynchos, sheep, cows Warai woods: with the help of a thermometer we measured the temperature in the night and the day and the average temperature was about 32? in the day and 16? in the night making the temperature very suitable for the growth of plants and tress. ...read more.

The presence of plants with big leaves help keep the temperature down and restricted the amount of sunlight reaching the surface hence the rate of evaporation decreased thus sustaining the amount of water in the plants. Argemone, a shrub with pointed leaves and short stems, was found on the riverbank, lake side and forest thus showing that it can adjust to any climatic condition and can grow almost anywhere. Leucena (research). The birds found in warai were Corvus splendens (house crow) and Corvus macrorhynchos (jungle crow) though they were not too deep in the forest and were seen in the presence of humans showing us that they were not affected by noise and could adapt quite easily. We were told that Myna's and Sky Lark's were also inhabitants of the Warai forest but we were unable to spot those birds proving that they lived in the centre of the forest where there was scanty influence of the humans and that they were quite rare. We also spotted some sheep and cows. ...read more.