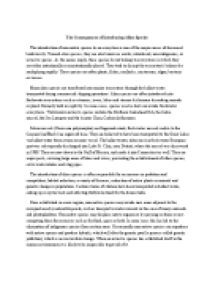 The consequences of introducing alien species into a ecosystem

﻿The Consequences of Introducing Alien Species The introduction of non-native species to an ecosystem is one of the major causes of decreased biodiversity. Termed alien species, they are also known as exotic, introduced, non-indigenous, or invasive species. As the names imply, these species do not belong to ecosystems in which they are either intentionally or unintentionally placed. They tend to disrupt the ecosystem's balance by multiplying rapidly. These species are often plants, fishes, mollusks, crustaceans, algae, bacteria or viruses. Many alien species are transferred into marine ecosystems through the ballast water transported during commercial shipping operations. ...read more.

Zebra mussels (Dreissena polymorpha) are fingernail-sized, fresh water mussels native to the Caspian Sea/Black Sea region of Asia. They are believed to have been transported to the Great Lakes via ballast water from a trans-oceanic vessel. The ballast water, taken on in a fresh water European port was subsequently discharged into Lake St. Clair, near Detroit, where the mussel was discovered in 1988. They are now down to the Gulf of Mexico, and made it into Connecticut as well. They are major pests, covering large areas of lakes and rivers, preventing the establishment of other species, cover water intakes and clog pipes. ...read more.

Once established in a new region, non-native species may invade new areas adjacent to the occupied area by natural dispersal, such as transport in water currents in the case of many seaweeds and phytoplankton. Non-native species may displace native organisms by preying on them or out-competing them for resources such as for food, space or both. In some cases this has led to the elimination of indigenous species from certain areas. Occasionally non-native species can reproduce with native species and produce hybrids, which will alter the genetic pool (a process called genetic pollution), which is an irreversible change. When an invasive species has established itself in the marine environment, it is likely to be impossible to get rid of it. ...read more.