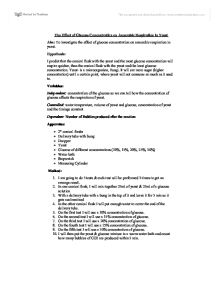 The Effect of Glucose Concentration on Anaerobic Respiration in Yeast

In this experiment the strongest concentration speeded up the rate of respiration, while the weakest concentration slowed up the production of CO2. Evaluation: In my opinion, the experiment was quite successful. Although there were some things that might be measured differently. Number of bubbles may not be the best way to measure the rate of respiration in yeast, since human eye can make mistakes. Also it was very hard to keep the water bath's temperature constant at a room temperature (25� C), so I had to pour hot water from time to time in order to prevent decrease in temperature. Next time it would be very interesting to investigate higher concentration of Glucose, in order to see after what level of concentration, rate of respiration falls. I suppose the results that I obtained during this experiment were reliable enough to support my hypothesis. Reference: http://www.practicalchemistry.org/experiments/fermentation-of-glucose-using-yeast,109,EX.html http://www.jbc.org/content/173/1/1.full.pdf http://www.chemie.uni-regensburg.de/Organische_Chemie/Didaktik/Keusch/D-fermentation_sugar-e.htm http://www-saps.plantsci.cam.ac.uk/records/rec358.htm ?? ?? ?? ?? ...read more.