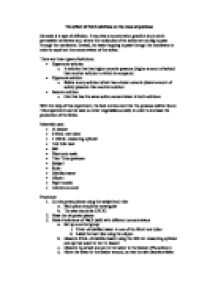 The effect of NaCl solutions on the mass of potatoes

The effect of NaCl solutions on the mass of potatoes Osmosis is a type of diffusion. It requires a concentration gradient and a semi-permeable membrane and, where the molecules of the solute are too big to pass through the membrane. Instead, the water is going to pass through the membrane in order to equal out the concentration of the solute. There are three types of solutions: * Hypertonic solution o A solution that has higher osmotic pressure (higher amount of solute) than another solution to which is compared * Hypotonic solution o Refers to any solution which has a lower osmotic (lower amount of solute) pressure than another solution * Isotonic solution o One that has the same solute concentration in both solutions With the help of this experiment, the best environment for the potatoes will be found. ...read more.

d. Move the water in the beaker around, so that the salt dissolves faster e. After the salt is dissolved, pour it back to the measuring cylinder f. Pour water until 50mL g. Pour 25mL of the water into one of the test tubes h. Label the test tube using the oil pen i. Repeat the steps b-h using 2g, 3g, 4g and 5g of salt (4%, 6%, 8% and 10% solutions respectively) 4. Put one potato piece in each test tube 5. Cover the top of each test tube with an aluminum cover in order to avoid evaporation 6. After 24 hours, take out the potato pieces 7. Gently dry the surface using paper towels 8. Measure the mass of the potatoes Variables: Independent variable: % solution Dependent variable: % mass change Controlled variable How? ...read more.

The % mass change decreased with the increase of the % salt solution. Possible errors and improvements * Possible errors o Potato pieces * First of all, not all of the pieces were perfectly rectangular, which could have affected the osmosis rate * Secondly, some pieces were not long/wide enough, some of them even had the peel on them * Improvements o Larger and sharper knives could have been used, in order to cut more precisely, or, instead, smaller potato pieces could have been used for the experiment Conclusion The data of all individuals followed the same general pattern, where the potatoes gained most mass in 0% solution, and lost most mass in 2% solution. The % mass change decreased with the increase of the % salt solution. This means, that potatoes grow best in hypotonic solutions, and they lose mass in hypertonic solutions. There were not a lot of sources of error, and those possible errors were avoided by several individuals doing the experiment. ...read more.