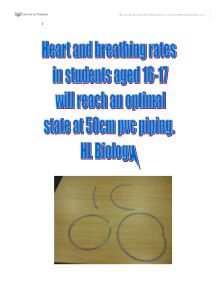 Contents Page Contents 1 Title page 2 Contents 3 Focus question, Hypothesis, Theory 4 Variables tables, controlled variable 5 Materials and apparatus Safety aspects 6 Method, Experimental set up 7 Bibliography 8 Qualitative data, Raw data table 1 9 Raw data table 1 10 Overview, Calculations, Experimental setup 11 Processed data table 1,Processed data table 2 12 Processed data graph 1 13 Processed data graph 2 14 Conclusion 15 Conclusion continued 16 Conclusion continued 17 Experimental limitations 18 Experimental limitations continued 19 Improvements to experimental design 1.0.0 Experimental design 1.1.1 Focus Question- What length of pvc piping concedes with optimal breathing and heart rates students aged 16-17? 1.1.2 Hypothesis- Heart and breathing rates for students aged 16-17 will reach an optimal state at 50cm pvc piping. 1.1.3 Theory- Breathing on Everest is often compared to breathing through a straw (Larry Rigsby 2008). This is due to the air at an altitude being much thinner then the air at sea level. However the analogy of "breathing through at straw" remains partially true to what it is meant to represent. If anything may it be air or liquid passes through a straw, the substance must be compacted into a much smaller area, travel further, and be absorbed from further away. Once again considering the breathing air through a straw scenario the air needs to be drawn through a surface area that is far smaller than breathing normally. It is still very possible to take full breaths while breathing through a straw. However it takes far longer. Breathing through a straw is not only difficult due to restrictions in surface area but they are also difficult to breathe through because the air has to be drawn from a distance that is further than normal. The ability to draw this air from a distance is one of the limitations of human lungs. Snorkelling equipment cannot be conditioned with excessively long snorkels because after about 28 inches it becomes impossible to breathe through due to the combination of pressure and the limitations of lung intake (VBulletin, 2008). ...read more.

Assuming this a graph extrapolation beyond 100cm a continual drop in breathing rates would be observed (until the point that subjects could no longer inhale at all). Breathing rate dropped below optimal limits (16 breaths per minute) at 75 cm. 3.0.0- Conclusion and eventuation 3.1.0- Conclusion The hypothesis "Heart and breathing rates of students aged 16-17 will reach an optimal state at 50cm pvc piping." was suggested to be partially correct without considering experimental flaws. From figure 3 it can be observed that as the length of pvc piping increased the heart rates of male students increased as well. This increased was observed to be exponential with each independent increasing being larger than the former. This suggests that with each subsequent addition of length imposes a uniformly increasing heart rate. This increasing trend in heart rate could be compared to the decreasing trend displayed in figure 4. As the length of pipe increased the breathing rates of subject's decreased. However the exponential trend displayed within figure 3 was not emulated in figure 4, a more chaotic trend was displayed. However, considering only the rising heart rate and the decreasing breathing rate it could be suggested that the two are related. From the two figures it seems that as breathing rates decrease, heart rates subsequently increase as the length of PVC pipe increase. The increase in heart rate itself could most likely be explained by the suspected theory. As subjects were imposed into pipe breathing their ability to inhale and exhale was inhibited. It would have physically become more difficult to inhale and hence the rate of breathing would have slowed lowering oxygen intake. However the composition of the human body does not change which means that a lower volume of oxygen has to be transported over the same surface area. To achieve this transport the heart itself would have needed to beat faster resulting in an increase in heart rate. ...read more.

In future experiments other age and sex groups should also be examined to determine if optimal lengths change between sexes and age. Understanding of optimization limits between different groups could aid in the design of breathing apparatus from individual groups or perhaps the design of the most universally balanced (average across all groups) breathing apparatus. 3.3.0 Improvements for experimental design (table 6) Indentified error Type of error Method for control Individuality between subjects (Standard deviation) Systematic The standard deviation cannot be directly decreased. However the validly of the average may be improve by increasing the sample size. Alternatively subjects could be divested into separate groups that act as a better discriminator between physical objectives such as height and weight. The experimenter however must be considered that they do not segregate to the level that they are analysing individuals rather then analysing a group. Bending in longer pipe lengths Systematic Use a material that is more stable then PVC or have a second experimenter keep the pipe at a straight angle. Concentration of subjects Systematic Subjects should be informed of the requirement of a specific breathing pattern prior to the experiment so that it may be emulated in both the control and the conditions Subconscious nervousness Systematic Subjects should repeat each condition twice with the second repeat being recorded hence allowing time for the body to accommodate new breathing environments. Rest time Systematic Subjects should be given adequate rest. Perhaps 5-10 minutes. A more exact time can be predetermined by performing a sub experiment examining how long it takes the heart of subjects to return to rest. Timing of experiment Systematic Some subjects may have needed to rush to meet the experiments deadline resulting in increased heart rate. The experiment should be setup either without time constraints or with time barriers that are adaptable and allow subjects sufficient time to reach the testing arena. Limited scope Systematic For the experiment to become valid in the real world a larger array of groups must be considered. Future experiments should incorporate larger; more varied and perhaps more defined physical groups. ?? ?? ?? ?? 1 ...read more.