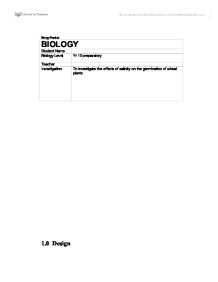 The Effects of Salinity on Wheat Germination

Biology Practical BIOLOGY Student Name Biology Level Yr 10 preparatory Teacher Investigation To investigate the effects of salinity on the germination of wheat plants. 1.0 Design 1.1 Defining the problem 1.1.1 Focus/Research Question Does salinity affect the time it takes for wheat to germinate and then the rate at which it grows from that point onwards? 1.1.2 Hypothesis Germinating wheat seed in a solution of 0% salt content, 2% salt content, and 5% salt content will have the shortest, longer and then the longest germination times, respectively and then growing the shoots in a solution of 0% salt content, 2% salt content, and 5% salt content will have the most growth, less growth and the least growth respectively on a day-by-day basis from the seed's germination as measured by height for the five days after germination within a reasonable range defined as within the first 7 days. 1.1.3 Background Information/Theory Salinity in water used to irrigate plants and soil salinity can have a considerable effect on the intensive agriculture of wheat plant germination and growth (Effect of salts on germination of seeds and growth of young plants of Hordeum vulgare, Triticum aestivum, Cicer arietinum and Brassica juncea. Mer, R.K., P.K. Prajith, D.H. Pandya and A.N. Pandey, 2000). These marked adverse affects take place on a cellular level by affecting cellular diffusion thus affecting the mechanisms of osmosis and interfering with the ionic status of the permeable membranes that surround each of our cells (CiNii.co.jp, Latest Edition, effect of salt concentrations of various plants, website: http://ci.nii.ac.jp/naid/110000978592/). Ion concentration is central to the process of osmosis and excess of certain ions such as NaCl can affect nutrient transfer through the cell (Biology for the IB Diploma, C.J. Clegg, 2007). Indeed, the most possible cause of varietal difference most likely evolves ion transport properties and cellular compartementation (Causes of Varietal differences in Salt tolerance. In: International congress of plant physiology, Munns, R., 1988). ...read more.

In addition, not controlling for the weather may have had all sorts of unusual effects on the wheat seeds. A recommendation for preventing this would be to artificially mimic as many elements of their ideal natural environment. The weakness in determining when the seeds had actually germinated was that it was difficult to tell when the shoots actually came out. This could be better determined if they were checked more regularly say every half a day to see if germination had taken place. This would lead to more precise measurements of germination times thereby leading to more precise results which can aid in evaluating the value of the results. The seeds that were used in this experiment may have had individual genetic component differences which may have affected the outcome of the experiment. If all the seeds were specially grown so that they all had exactly the same genetic components then this would offer far better results. 3.2.3 Significance of weaknesses on experimental results It does not seem that the weaknesses had any real noticeable effect on the results as the results seem to all support the hypothesis. However this may simply be due to the random effects of chaos theory which may be leading up to see causality where there is none due to all the random effects of factors which have not been controlled which on their own are not statically significant but together have affected the outcome of the experiment. It would not seem though that this is a likely situation. Further empirical testing of the reliability and further replication of these results is required and to be expected before the acceptance of any theory and hypothesis model. 3.3 Improvements to the experiment Some of the improvements to the experiment have been proposed in weaknesses and limitations of the experiment (3.2.2). Further experimentation should be also undertaken in a lab setting as this would allow easier access to result, experimental setup and control of variables. ...read more.