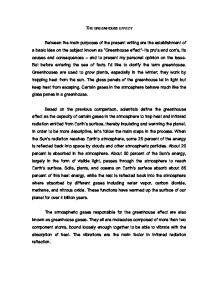 THE GREENHOUSE EFFECT Between the main purposes of the present writing are the establishment of a basic idea on the subject known as "Greenhouse effect"- its pro's and con's, its causes and consequences - and to present my personal opinion on the issue. But before entering the sea of facts I'd like to clarify the term greenhouse. Greenhouses are used to grow plants, especially in the winter; they work by trapping heat from the sun. The glass panels of the greenhouse let in light but keep heat from escaping. Certain gases in the atmosphere behave much like the glass panes in a greenhouse. Based on the previous comparison, scientists define the greenhouse effect as the capacity of certain gases in the atmosphere to trap heat and infrared radiation emitted from Earth's surface, thereby insulating and warming the planet. In order to be more descriptive, let's follow the main steps in the process. When the Sun's radiation reaches Earth's atmosphere, some 25 percent of the energy is reflected back into space by clouds and other atmospheric particles. About 20 percent is absorbed in the atmosphere. ...read more.

Understanding local, regional, and global albedo effects is critical to predicting global climate change. But what is that we can really do about it? Not much I'm afraid, because climate changes are inevitable - Earth doesn't respond that quickly to external changes. Man kind can only save a part of the future, because if not - the consequences will be tragical and they will follow soon. Rising temperatures would raise sea levels as well, reducing supplies of fresh water as flooding occurs along coastlines worldwide and salt water reaches inland. Many of the world's endangered species would become extinct; millions of people also would be affected, especially poor people who live in precarious locations or depend on the land for a subsistence living. Certain vector-borne diseases carried by animals or insects, such as malaria, would become more widespread as warmer conditions expanded their range. We cannot reverse what we've already done. We can only hope to slow down Global Warming, so the future generations can see Earth at leas a little bit as we know it now in days. Reducing use of fossil fuels would considerably reduce the amount of carbon dioxide produced, as well as reducing the levels of the pollutants which cause acid rain. ...read more.

Some of us recycle, some of us try to protect animal extinction, to reduce pollution, bit there is no use of it while the word some is the one that begins the sentence. The correct phrase is all of us; the right way is the global way. There is Global warming, well then - let us start "Global Cooling". Our society has so many issues to resolve, that the environmental problems seem quite insignificant sometimes. Poverty, diseases, wars, aggression, species' extinction and destruction, religious fanatism... They say we've evoluted. I don't think so! If it were true, I wouldn't actually be writing this essay right now because there wouldn't be a problem to discuss, or at least not in such huge parameters. The greenhouse effect is a naturally occurring process. Should it stop? Never. Should we slow it down? Absolutely. We cannot reverse what's already done; we cannot bring the planet to its original state, but we can definitely try to reduce our fault, to correct our mistakes. By defining our posture we're defining our future, our present and if in a million years Earth will have a human past to talk about, because now or later, the only self-destructing specie is us. If we are extinct one day, I assure you there will be no meteorite to blame. ...read more.