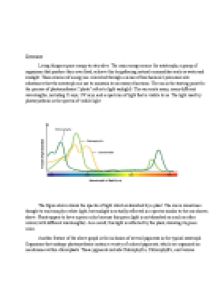 The Light Dependent Reactions of Photosynthesis

﻿Overview Living things require energy to stay alive. The main energy source for autotrophs, a group of organisms that produce their own food, achieve this by gathering natural commodities such as water and sunlight. These sources of energy are converted through a series of biochemical l processes into substances that the autotroph can use to maintain its necessary functions. The sun is the starting point for the process of photosynthesis ("photo" refers to light sunlight). The sun emits many, many different wavelengths, including X-rays, UV rays, and a spectrum of light that is visible to us. The light used by photosynthesis is the spectra of visible light. The figure above shows the spectra of light which is absorbed by a plant. The sun is sometimes thought to emit simply a white light, but sunlight is actually reflected in a spectra similar to the one shown above. Plants appear to have a green color because this green light is not absorbed as much as other colors (with different wavelengths). As a result, this light is reflected by the plant, showing its green color. ...read more.

The main photosynthetic part is the leaf. Their large surface area (flat and wide) maximizes surface area to absorb as much light as possible. Leaf cells also contain many chloroplasts, the setting of photosynthesis. In the diagram below, the sites of the light dependent and light independent reactions are shown (thylakoid and stroma). An inner membrane and outer membrane are also pictured. Plants without ample exposure to light will attempt to move as close as possible to a light source to maintain a high level of light absorption (phototropism). Thylakoids are arranged in stacks, called grana, which increases the light-absorbing ability for the plant. Light Dependent Reactions These reactions occur in the membranes of thylakoids. The process begins in photosystem II. To begin, light energy is used to split water (photolysis) which has been absorbed through xylem via transpiration. Water is broken down into hydrogen, oxygen, and electrons. The photon moves through various pigments, which become excited and unstable, quickly passing the energy to the following pigments until the photon is transported to special chlorophyll a. This pigment is also excited and releases an electron to the primary acceptor. ...read more.

are added to the 6 3-phosphoglyerates (which refers to a 3-carbon structure with a phosphate bound to carbons 1 &3). NADPH from the light dependent reactions are split into NADP+ and 6 phosphates. The energy from the electron movement allows the 6 3-biophosphoglycerate and 6 phosphates to become 6G3P. Of the 6G3P, 5G3P are used to recreate RuBP (Ribulose Biphosphate, which is a 5-C molecule). 3ATP is split into 3ADP and 3 phosphates. The electron energy (from higher to lower level) drives the synthesis of 3RuBP to again react with CO2 to continue the cycle. Stages Carbon fixation is the change of carbon from a gaseous form (CO2) to a solid molecule, such as G3P. Reduction refers to the release of phosphates from 6ATP to form 6ADP and 6 phosphates. With this reaction, energy from the movement of electrons from a higher to lower state create the energy needed for following reactions. The exit of a single G3P contributes to the synthesis of glucose, which is the end product of the Calvin cycle. 2 G3P makes one glucose. Regeneration (of RuBP) shows the cyclic nature of the Calvin cycle. 5G3P, when 3ATP become 3ADP, use the 3 new phosphates with the electron energy to form 3RuBP to be used in the next cycle of these reactions. ...read more.