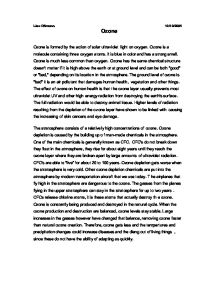 the ozone and the greenhouse effects

Lisa O�mann 10/10/2005 Ozone Ozone is formed by the action of solar ultraviolet light on oxygen. Ozone is a molecule containing three oxygen atoms. It is blue in color and has a strong smell. Ozone is much less common than oxygen. Ozone has the same chemical structure doesn't matter if it is high above the earth or at ground level and can be both "good" or "bad," depending on its location in the atmosphere. The ground level of ozone is "bad" it is an air pollutant that damages human health, vegetation and other things. The effect of ozone on human health is that the ozone layer usually prevents most ultraviolet UV and other high energy radiation from destroying the earth's surface. The full radiation would be able to destroy animal tissue. Higher levels of radiation resulting from the depletion of the ozone layer have shown to be linked with causing the increasing of skin cancers and eye damage. ...read more.

CFCs release chlorine atoms, it is these atoms that actually destroy the ozone. Ozone is constantly being produced and destroyed in the natural cycle. When the ozone production and destruction are balanced, ozone levels stay stable. Large increases in the gasses however have changed that balance, removing ozone faster than natural ozone creation. Therefore, ozone gets less and the tempertures and precipitation changes could increase diseases and the dieng out of living things, since these do not have the ability of adapting as quickly. Greenhouse The greenhouse effect is the warming of the earth's surface, which gets more intense when the amount of carbon dioxide increases in the atmosphere. It permits incoming solar radiation to reach the surface of the earth. The atmosphere allows a large percentage of rays of visible light from the Sun to reach the Earth's surface and heat it this way. ...read more.

Individuals can save energy with making the right choices. In heating, by using alternative energy sources that produce less CO2, mainly renewable energy sources. Choices of transportation, by generally driving less. The Governments can help by controlling the businesses, because some industries such of electronics, metals and chemicals can lower their output of greenhouse gases. All companies can cut their CO2 emissions by making their industrial processes more safe, using improved systems and other forms of energy. Fossil fuel use as well as producing greenhouse gases creates other bad products. These products are also pollutants, like sulphur dioxide, soot, and ash. These pollutants change the properties of clouds. Clouds are formed when water droplets join with particles such as pollen. Polluted air gets the result of clouds with larger number of droplets than unpolluted clouds. This then makes more of the sun's heat and energy reflected back into space. This kind of reduction of heat reaching the earth is known as Global Dimming. ...read more.