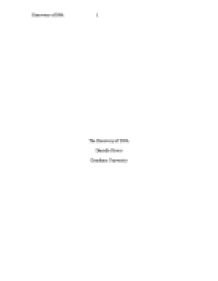 The Story of the Discovery of DNA

﻿Discovery of DNA The Discovery of DNA Danielle Rivers Grantham University Everyday there are new discoveries being made resulting in even greater benefits for people worldwide. What if I stated that those profound discoveries that can save thousands of lives and make life easier for you and I started out as a photograph? That photograph is now modern days double helix DNA. Nevertheless, the road to the discovery of DNA initiated in 1950 when James Watson journeyed to England to pursue research there. His intention was to continue his post-doctoral research there on phages; viruses that attack bacteria. Once Watson arrived in England, he met Francis Crick, in his early thirties pursuing his post-doctoral work. Crick was primarily intrigued with proteins, and their structure, and he utilized an x-ray crystallography technique to study proteins. Due to his admiration of reading, Crick was known to be profoundly knowledgeable. Once the two met, they quickly developed a genuine peer relationship. They were able to compliment each other?s research and Watson?s background in biology was nicely balanced by Crick?s background in physics. The two scientists did not focus on DNA or did any research relating to DNA when they met, even though they were credited with the breakthrough of its structure. ...read more.

Watson attended a seminar where Rosalind Franklin presented her discoveries. She disclosed her photographs to the seminar attendees, and pronounced other aspects of her DNA research. Watson returned to Crick?s without any notes from the seminar. Watson depended on his memory, but it was ultimately a failure because he was only able to convey to his partner qualitative descriptions rather then exact quantitative descriptions. It was implied that if Crick attended the seminar, or if Watson took notes, they might have solved the puzzle sooner. The fact that Crick was experienced with x-ray diffraction by helical proteins made it less difficult for him to decode the information in the x-ray photograph of a DNA molecule. He was able to make mathematical calculations about bond angles and distance between atoms. Yet his initial calculations were off, even if only slightly. Unfortunately, he and Watson were asked by their cooperating supervisor to dismiss their DNA workings and immediately return to the work he had intended for them. They continued their work for their supervisor for approximately a year. Meanwhile, in the year 1952, it seemed as though Rosalind Franklin was the only person working on DNA assiduously. ...read more.

The world was stunned, and they were themselves. The two made history astonishingly, but not only for discovering the structure of a DNA molecule, but also as two scientists who, although both extremely clever, won the race of stepping on the backs of others. Additionally, in December of 1962 a Nobel Prize in medicine was bestowed to Watson and Crick for the discovery of the DNA structure and to Maurice Wilkins for the x-ray photograph. Although it was indeed Rosalind Franklin who took the photograph, she died of cancer in 1958 at the age of 37 of ovarian cancer (Scott, 2010). All in all, the discovery of DNA will remain important in modern science. DNA was not discovered by one or two scientists but instead a group of scientists over a span of years. Watson, Crick, Wilkins, and Franklin discovered the secret of life. DNAwas a major part of science historically and presently and has led to many discoveries about the human genome. It allows us to map out our ancestors, prevent many disorders or illnesses, allows breakthroughs in criminal cases and more things that we cannot imagine. DNA is indeed the blueprint of life and these scientists and their discoveries, whether they ultimately deserved the credit or not found the sketches of the blueprint and that was just the beginning. ...read more.