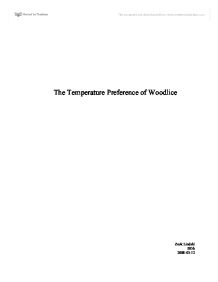 The Temperature Preference of Woodlice

The Temperature Preference of Woodlice Zack Lindahl IB3b 2008-03-12 Aim The aim of this laboration was to see what temperature woodlice preferred in the range of 21�C-25�C. Hypothesis As woodlice burrow and prefer moist environment they are likely to prefer cool places over warm places, so they will probably seek away from the light. Variables Independent: Temperature. The temperature was changed via a heat lamp which warmed one end of the plastic box evenly. Dependant: The number of woodlice present in different temperature zones. Controlled: Moisture. Equally moist pieces of paper were placed evenly over the bottom of the box. Lighting. The lighting in the room was even and the box was placed in a location were there did not occur any major shady spots within it. The light of the heat lamp was filtered out by a piece of paper. Soil distribution. An even layer of soil was spread over the surface. Size of zones. The size of the 8 different zones was all measured to be 5 cm in width. List of materials 40x20 cm Plastic box Paper towels Heat lamp 8 Thermometers Procedure A plastic box that was large and shallow enough was selected and an infrared heat lamp was put on the short side. ...read more.

The number of woodlice was fairly small due to lack of available specimen, but to get sufficient result a larger population of woodlice would be needed. Around 20-30 woodlice would be sufficient to read their collective preference more clearly. The major weakness in this experiment was the ignored behavior pattern that woodlice have more specifically their tendency for positive thigmokenesis i.e will to have their body in contact with other objects.2 As the box contained moist paper towels there was a notable tendency for the woodlice to try to crawl under it. This might have had a large impact on their migration habits within the box as they would seek tight spaces more than a preferable temperature. Furthermore, there was not enough time to properly see if the woodlice would settle down and stop most movement in specific areas. Several hours would be needed to sufficiently observe what their favorite area in the box was. On a positive note, no woodlice were harmed while executing this experiment. 1G.J.Mckenzie, Woodlice Homepage, http://www.geocities.com/~gregmck/woodlice/habitat.htm Middleton Grange School,Christchurch NZ, accessed 2008-03-11 2 G.J.Mckenzie, Woodlice Homepage, http://www.geocities.com/~gregmck/woodlice/habitat.htm Middleton Grange School,Christchurch NZ, accessed 2008-03-11 ?? ?? ?? ?? ...read more.