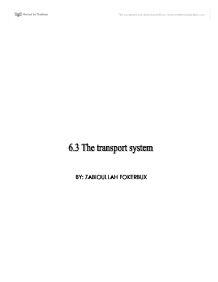 BY: ZABIOULLAH FOKERBUX 6.2.1- Draw and label a diagram of the heart showing the four chambers, associated blood vessels, valves and the route of blood through the heart. 6.2.2- State that the coronary arteries supply heart muscle with oxygen and nutrients The coronary arteries form part of the aorta, which branch off to the semilunar valve. The role of the coronary arteries is to supply blood to the heart muscles with nutrients and oxygen (for aerobic cell respiration, providing energy for muscle contraction). 6.2.3- Explain the action of the heart in terms of collecting blood, pumping blood, and opening and closing of valves. The heart is split into four chambers: right and left atrium, and right and left ventricle. The atria are the collecting chambers (collecting blood from the veins at low pressure) ...read more.

The closing of the atrioventricular valves produces the first heart sound (lub). Soon after, the ventricle relaxes (ventricular diastole), closing the semilunar valves. This prevents the backflow of blood from the pulmonary artery and aorta. The closing of the semilunar valves produces the second heart sound (dub). 6.2.4- Outline the control of the heart in terms of myogenic muscle contraction, the role of pacemaker, nerves, medulla of the brain and the epinephrine (adrenaline). The heart consists of cardiac muscles on its wall. The contraction of the cardiac muscle is myogenic, which means that it can contract on its own without being stimulated by a nerve. In other words it does not depend on the brain to give it confirmation for a heartbeat. The pacemaker is the region which is responsible for sending the signal for each contraction. ...read more.