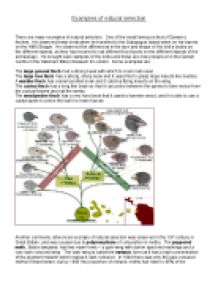 There are many examples of natural selection. One of the most famous is that of Darwins finches.

﻿Examples of natural selection There are many examples of natural selection. One of the most famous is that of Darwin?s finches. He observed these birds when he travelled to the Galapagos Island when on his travels on the HMS Beagle. He observed the differences in the size and shape of the bird?s beaks on the different islands, as they had evolved to eat different food types on the different islands of the archipelago. He brought back samples of the birds and these are now preserved in the Darwin Centre in the National History Museum in London. Some examples are: The large ground finch had a strong beak with which to crack nuts open. The large tree finch has a strong, sharp beak and it uses this to grasp large insects like beetles. A warbler finch has a small pointed beak and it catches flying insects on the wing. ...read more.

In the fifty years or so between then Manchester had become so industrialised that the pollution had turned the surfaces of many buildings and trees black. In polluted areas the darker moths had the selectional advantage as they could not be seen easily by birds and eaten, whereas in unpolluted areas the light speckled moths had the selectional advantage as they blended in on the natural lichen or tree bark. The genotype of melnanic is CC or Cc and pale is cc. One of the most worrying examples of natural selection is that of antibiotic resistance by a number of bacteria. When a person is prescribed a course of antibiotic medication it is important that they take the complete course and not stop before the end, even if the symptoms have disappeared. The reason for this is that the susceptible bacteria will be killed immediately and those that have a greater resistance are not affected immediately, if at all. ...read more.

If a MRSA bacterium enters the bloodstream it can cause septicaemia, septic shock, pneumonia, abcesses, meningitis and death. It is mainly a concern for surgical patients in hospitals. C.difficile - Clostridium difficile (C. difficile) is a bacterium that is present naturally in the gut of around two-thirds of children and 3% of adults. C. difficile does not cause any problems in healthy people. However, some antibiotics that are used to treat other health conditions can interfere with the balance of 'good' bacteria in the gut. When this happens, C. difficile bacteria can multiply and produce toxins (poisons), which cause illness such as diarrhoea and fever. At this point, a person is said to be infected with C. difficile. Most cases happen in a healthcare environment, such as a hospital or care home. Older people are most at risk from infection, and most cases occur in people aged over 65. Children under the age of two are not usually affected. ...read more.